There is, not surprisingly, little written in the aquarium literature when it comes to foram husbandry, though there doesn’t seem to be any great challenge involved, as conditions favorable to coral growth will inherently be favorable to most reef-dwelling forams as well. A study conducted in a large reef aquarium at the Burgers’ Zoo, Netherlands found a remarkably diverse assemblage of species which had unintentionally been introduced, totalling fifty identifiable taxa. The most abundant was the endosymbiotic Heterostegina depressa—a species which looks something like a nautilus writ small, while a great many species (particularly from the Family Miliolidae) were imperceptibly tiny and would easily be mistaken for grains of sands. Undoubtedly, these same inconspicuous species are likely to abound in any well-established reef tank, hiding in plain sight. 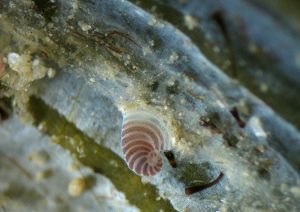 Note the red coloration in this Peneroplis, caused by the presence of a symbiotic red alga. Credit: Christopher S. Lobban

Forams often display clear preferences in choice of habitat. Just as we would expect in corals, variables such as the substrate type, the relative amount of illumination and water flow, and even temperature strongly dictate where a given foram can be expected to occur. Encrusting taxa have been well studied in this regard, with Homotrema and Nubecularia favoring inshore habitats, Planorbulina found at patch reefs, and Gypsina plana along reef slopes. Most non-encrusting taxa show similar preferences for different reef habitats—lagoons vs. reef crests vs. reef slopes, etc. There are examples of mesophotic forams (such as Cycloclypeus, a species restricted beneath thermoclines at around 90 meters) as well as a great many found deeper still.

Based on observations taken at the Burgers’ Zoo, specimens illustrate their own subtle specializations in captivity. The arborescent encrusters (Homotrema & Miniacina) are limited to the undersides of hard substrates receiving moderate to heavy amounts of water flow, while Trisoculina and Sorites are commonly found atop live rock. Peneroplis, a porcelaneous species with an endosymbiotic red alga, was generally restricted to the shallowest locations, likely due to the light requirements of its rhodophyte. Amphistegina proved more abundant in sand-rubble habitats at greater depths, though it tends to be a widespread generalist in the wild, while Heterostegina depressa occurred as the most abundant foram in every sample examined. 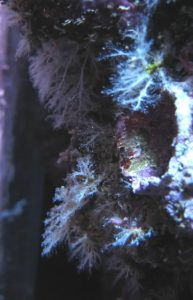 If we are to make any larger statements regarding aquarium forams, it’s that symbiotic taxa thrive under our bright lights, while arborescent suspension feeders clearly find messy aquarium water to their liking. But, as yet, we know relatively little about how other ecologically specialized forams fare in captivity. Modern reefkeeping techniques often revolve around a naturalistic approach, a mimicking of a coral reef’s ecological functioning through live rock, algal cultures and the breakdown of organic waste from the associated microorganisms. Seeing as we know essentially nothing regarding how forams might contribute to this process (particularly for those which feed heavily on benthic detritus), there is clearly a great avenue for research here. Perhaps someday, forams might be seen as a vital component to the natural maintenance of a successful reef aquarium and not just another obscure microorganism hiding in the sand.