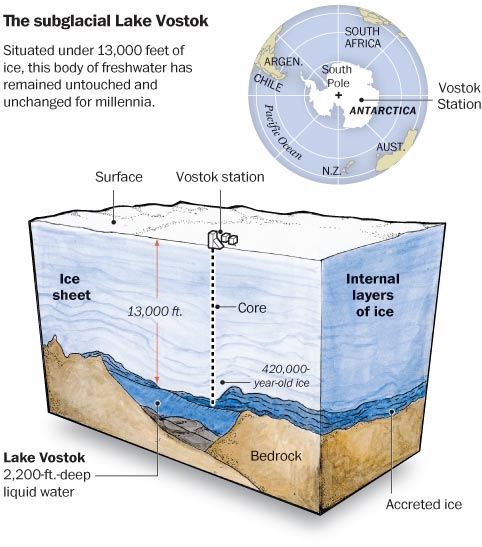 After twenty years of drilling effort, Russian scientists have managed to pierce through the ice sheet at Vostok Station, 1300km from the geographic South Pole, and into the world’s largest subglacial lake.

The ice sheet at Vostok Station stands 3768 m thick. The coring operation has become renowned for piecing together some of the longest ice core-based reconstructions of global climate variability ever generated, and was the location of the first ice core reconstruction to reach back over 400,000 years. This record began a revolutionary period of development in long ice core climate records, the longest of which, EPICA, was made renowned by its use in the film An Inconvenient Truth.

But what is perhaps equally remarkable is that in the 1990s, scientists realized that there was a subglacial lake beneath their station and drilling operation. The third largest freshwater lake on earth in terms of volume. The ice immediately overlying the lake surface is only about 420,000 years old, but the lake has likely been completely encased for 15-25 million years.

The implications here are tremendous. Ice thought to have frozen from the lake water has already revealed tantalizing clues that extremophiles are capable of surviving in the water, and any such life that can be found has been completely isolated evolutionarily since the Miocene Epoch. Scientists also hope be able to use the lake as a potential analogy to lakes that may exist on Europa or Encedadus, moons of Jupiter and Saturn, respectively.

However, there is a bittersweet tinge to the excitement of potentially observing, for the first time, such biological and geochemical processes as those that may be occurring in Lake Vostok. With the lake now being opened, it will be forever changed. Fundamentally, to learn what we can about this one of a kind habitat, it has to be forever stripped of that which forced it to become what it was: isolation.