More than 200 bottle nose dolphins are penned in a cove awaiting slaughter by Japanese fishermen, many of them stressed and bloodied from their attempts to escape.The dolphins earmarked for slaughter include those with nicks or markings which make them less desirable as captives.The Sea Shepherd Conservation Society described how about 40 to 60 local fishermen work with nets to divide up the pod, whose initial numbers were estimated by the group at more than 250.”They tighten up the nets to bring each sub-group together then the skiffs push them toward the tarps. Under the tarps in the shallows is where the trainers work with the killers to select the ‘prettiest’ dolphins which will sell and make the best pay day for the hunters,” the group said. 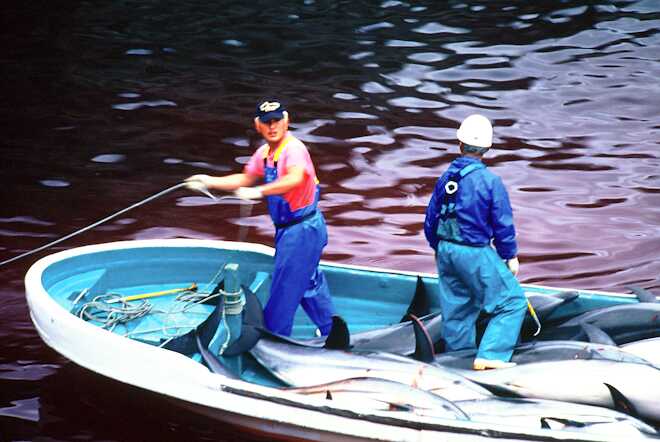 “But the process is brutal and stressful. Some of them die from injuries incurred during the manhandling or simply the stress.” Environmental activists have been monitoring activities in the cove in southwest Japan, which is a focal point of the Taiji community’s annual dolphin hunting season. Although the hunting of dolphins is widely condemned in the west, Japanese defend the practice as a local custom — and say it is no different to the slaughter of other animals for meat. Local officials have reacted angrily in the past to Western criticism of what they say is a traditional practice dating back centuries.”Taiji dolphin fishermen are just conducting a legal fishing activity in their traditional way in full accordance with regulations and rules under the supervision of both the national and the prefectural governments. Therefore, we believe there are no reasons to criticize the Taiji dolphin fishery.”