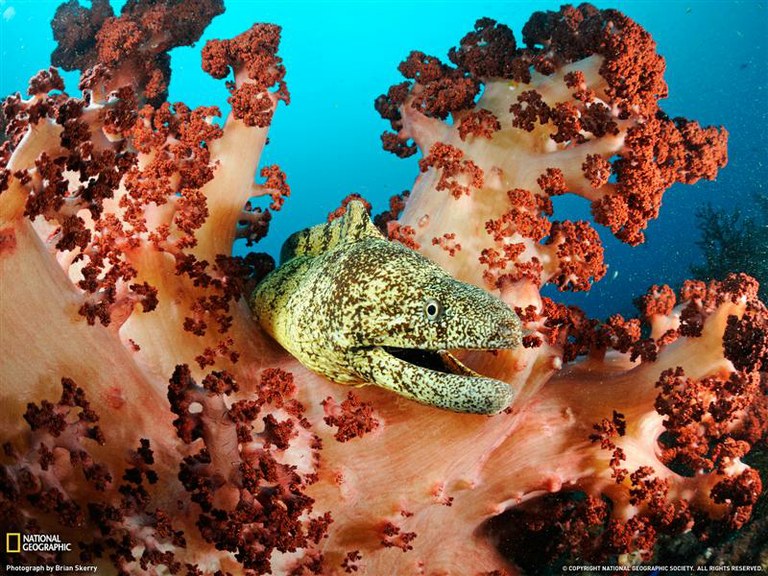 Eels are beautiful but dangerous creatures and we’ve covered them before in past issues of the magazine.  Both articles are a great read on these fish.

This photo from November 29 captures cold water corals from a reef in Svalbard, Norway which is in the Arctic archipelago.  Kenneth Wingerter has covered their husbandry for us in the past and both articles are a very good introduction into these species.

Lionfish have gotten a lot of news lately due to their proliferation as a non-native species in the US waters and Todd Gardner covered this story for us back in 2006.  Scientists are currently trying to find ways of controlling their populations in hopes of slowing down the spread. One method that’s gotten a lot of news lately is by putting them on the menu.  One researcher on coral-l suggested renaming them “Turkey Fish”.

Jellies are always one of the marine organisms that my family and I enjoy watching when we visit the local and national aquariums when we’re traveling.  In his two-part series (Part I and Part II), Adam Blundell M.S. covered what it would take to design a tank to keep these delicate creature.  In 2007, Jim Stime, Jr. covered keeping moon jellyfish in the home aquarium.  Last year I reviewed Chad Widmer’s How to Keep Jellyfish in Aquariums: An Introductory Guide for Maintaining Healthy Jellies book for Advanced Aquarist.  It’s a definite must-read if you’re interested in trying your hand at jellies.

Photograph by Melissa Fiene, My Shot

Clownfish are the staple of the home reef aquarium.  They’re brightly colored and mesmerizing to watch.  Many a reefkeeper got their feet wet with clownfish.  We’ve got three pages of search results on Advanced Aquarist for Clownfish so there’s plenty of reading material.  Some highlights of key articles would be Aquarium Fish: Reproduction and rearing of ocellaris clownfish (Amphiprion ocellaris) in Captivity by M.V. Bengoa-Ruigomez and Javier Urkiaga and our book review of The Complete Illustrated Breeder’s Guide to Marine Aquarium Fishes by Matthew L. Wittenrich.

Octopi are an interesting organism to keep. Robert Toonen, Ph.D. covered them for us in a past article entitled Aquarium Invertebrates: Housing An Octopus back in 2003.  Richard Ross covered – The Lesser Pacific Striped Octopus for us and Jay Hemdal covered Octopus chierchiaeCaptive Observations of the Mimic Octopus, Thaumoctopus mimicus.  For those serious about keeping them, an excellent online resource for their husbandry is TONMO: The Octopus News Magazine Online.

We’ve highlighted some of our favorite wallpapers from NatGeo so now how about you?  Do you have any great marine-related wallpapers that you’d like to share?  Sound off in the comments below.