There, I called out the two people who are most responsible for the “Limited Edition” or “Designer” coral craze.  Those two guys are the bane of average coral collectors everywhere.

You were expecting someone else?  Maybe one of those guys with their name attached to a bunch of different corals?  No, Yataro and Goro are the culprits, and let me explain why.

For all of those people who have not yet stopped reading this post and googled these two names, I’ll provide some background.

Yataro Iwasaki was the founder of the Mitsubishi Group, a large Japanese conglomerate that owns the majority of the Nikon company.  Goro Yoshida was the person responsible for the initial naming of the Canon company.  Luckily, they probably won’t be getting all “reef-drama” on me, considering they’ve both been dead for decades.

Between these two guys, just about every single Digital Single Lens Reflex (DSLR) used in the world today came to be.  Sure there are other cameras, but if you have ever spoken to a wanna-be photographer, your two options are Nikon and Canon, it’s like the Capulets and the Montagues.  How are cameras responsible for the price of corals?

It isn’t too hard to see that each and every LE coral has a very nice macro photo that started the craze.  Basically someone goes and takes a super close up macro (micro for those in the know) photo of a single polyp, and immediately following, the price goes through the roof.

In 2000, the price of a high quality DSLR was prohibitively expensive.  Basically, anyone who wanted to take a super-macro photo of a coral was either wealthy or a successful nature photographer/biologist.  I had a 3.3 megapixel camera with a pseudo-macro lens in 2000, it took pretty bad photos, couldn’t do real macro (1=1), and cost about $900.  Today you can get a 12 megapixel DSLR for $500, which is a high enough quality to print an A4 page and have it look GOOD.  Add a cheap macro lens and you are at $800, the same setup in 2000 cost about $4k

It is my belief, and I’ve asked a ton of other people who deal in LE frags, that super closeup photography is the leading cause of inflated coral pricing.  Everyone who sells LE corals HAS TO HAVE A DSLR.  That is the only way you are going to be able to name, brand, and sell a new coral.

Even a BAD photo of a “hornet” type zoanthid (alternating colors in the ring) makes them look pretty hot. 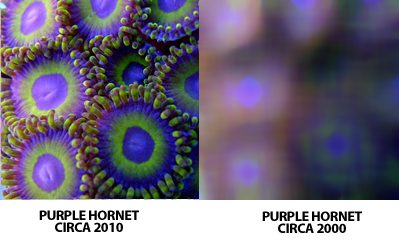 While the photos make them look super “sexy” (more about that word later), the fact is that a macro lens has a focal length of 50mm-150mm, which means that the only way you will ever see anything remotely close to that picture, is with your eyes pressed up against the glass of your tank.  Being able to see down into the incredibly detailed world of the polyp is indeed very cool, but in an aquarium that is more than 5 gallons, you’re just not going to see it.  Sure, with these photos you know that patterns and structures in the polyps are there, but step back just 6 inches and your eyes can’t discern very much.  The hottest corals out there seem to have unique definition at the macro level as well as high contrast between rings, skirts, mouths, etc.  You know what else is super cool under a microscope? Dust, hair, saliva, and bacteria.  Do you know anyone that keeps a tank of saliva in their living room so they can show off in front of their friends?

(If you answered yes to this question, please stop reading, close your browser, clear your cookies, browser cache, format your hard drive, burn your laptop and forget you were ever here.  Don’t forget to put the lotion in the basket.)

We lust for these animals because we know what they look like in the micro world, and we become convinced of their beauty and specialness because we can actually see them from far away.

The higher the levels of the two factors, patterns and contrast, the higher the price.  Supply and demand is an entirely different element that we will get into in a future post.

So thanks a lot Yataro and Goro, you opened our eyes and our wallets to the lilliputian world of the polyp!

While we are on the topic of visual characteristics adding to coral pricing, let’s dive a bit deeper into the issue of contrast.

Stare at this for 60 seconds and then try and tell me you don’t want to spend $100 for a single eye of the original mummy eye.

Aside from making you dizzy, this picture is telling you that it is very expensive but worth every penny.  Why?

In addition to zooming in super close for a photo and then presenting the buyer with an image big enough for their wall, smart sellers are now making use of the trippy effect above to generate interest in frag sales.  Making something sharp and distinguished against a duller background can easily fool the eye and the mind.  Which of these polyps would you buy? 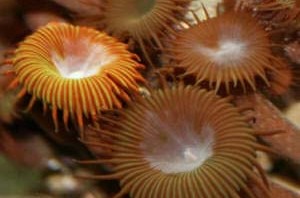 One of these polyps is a limited edition.

“You wanted the one on the left?  It is a different “morph”, a morph is a physical change in growth and form due to changes in environmental conditions.  In this case, this morph was caused by the proximity of my tank to my Photoshop equipped computer.  You see, there was some cross pollination between my 22″ high definition monitor and this colony, resulting in the strange color exhibited here.  It is quite rare and you are getting the only polyp.”

While we’re talking about photo trickery, let’s open the “Photoshop Coral Morph Menu”.  The software developers have made it nice and easy for an enterprising young Frag Whore™ to dramatically increase the value of their livestock.  Simply select the price range you want on the slider at the bottom of the screen:

What used to take millions of years of natural biological changes now takes about 5 seconds with the right tools.  If we can change a living organism that quickly, why don’t we do what people having been trying for thousands of years to do, CHANGE LEAD INTO GOLD!  We can’t do it quite that easily, but if we are willing to trade in your corals for gold, you can double your money by following this simple formula:

If you made a fortune off this simple trick, you owe a big thank you to the creators of Photoshop, these guys: