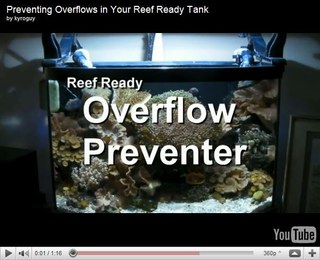 
All you need is a bit of electronics know-how, some time, and you, too, can DIY this simple circuit.

‘kyroguy’ over at MonsterMiniBow.com was in need of a simple kill switch for his return pump that would essentially turn off his return pump if the tank began to fill faster than the overflow could handle.  He was looking for something simple, inexpensive, and reliable that would accomplish the task. The problem was he couldn’t find anything that fit the bill, so he headed over to AllAboutCircuits.com where their members  (primarily a person by the handle ‘erich_7719’) helped him design the circuit.  Here is the complete parts list. The entire device costs less than $45 to assemble.

The final build ends up turning off the return pump once the rising water level touches the sensor that’s suspended over the aquarium.  After the plugged overflow problem is rectified, pressing the reset button turns the return pump back on.

The key differences compared to other overflow preventing switches out there are:

See how the DIY sensor functions in the below video:

Florida to hold hearings to discuss limits on coral harvests