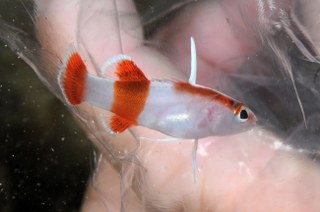 Both Liopropoma aberrans and Jeboehlkia gladifer are extreme deep water Atlantic species (we’re talking 150+ meter / 500+ feet).  Both specimens were collected using a deep sea submersible and are being sold on consignment through AquaTouch (Phoenix, AZ, USA).

In March, Reefbuilders blogged about the first ever collected Liopropoma aberrans available to the aquarium industry.  This specimen was reportedly destined for Blue Harbor, Japan.  The L.aberrans AquaTouch is selling on consignment may be (and is likely) the same specimen.

Jeboehlkia is a monospecific genus, and virtually no information is available about them.  This is a small species; $7999.00 buys you no more than an 4cm (1.5in) of fish.  It should be noted Fishbase lists Jeboehlkia gladifer as a subtropical species.

The genus Liopropoma is far better documented; These reef basslets are amongst the smallest members of the grouper family and are found throughout both the Pacific and Atlantic.  Other species (Swissguards, Cave Basslets, et al.) in this genus are hardy and good candidates for captivity, although they tend to be on the higher end of the price spectrum due to their reclusiveness and deeper-water occurrences.  There are several other rare and expensive deep water Liopropoma, most famous of which are L.carmabi (Caribbean) and L.aurora (Hawaii); However, none come close to the rarity and price of L.aberrans.  Like Jeboehlkia gladifer, not much information is available on Liopropoma aberrans, but it’s a fairly safe bet that the husbandry of L.aberrans is similar to other Liopropoma.

Now the question is: who’s crazy passionate enough to be the first to own these species?

AquaTouch also has in stock two specimens of the Caribbean deep water Lipogramma klayi basslets – for the comparatively bargain price of $999.00 each.