By Gary Parr 9 years ago2 Comments 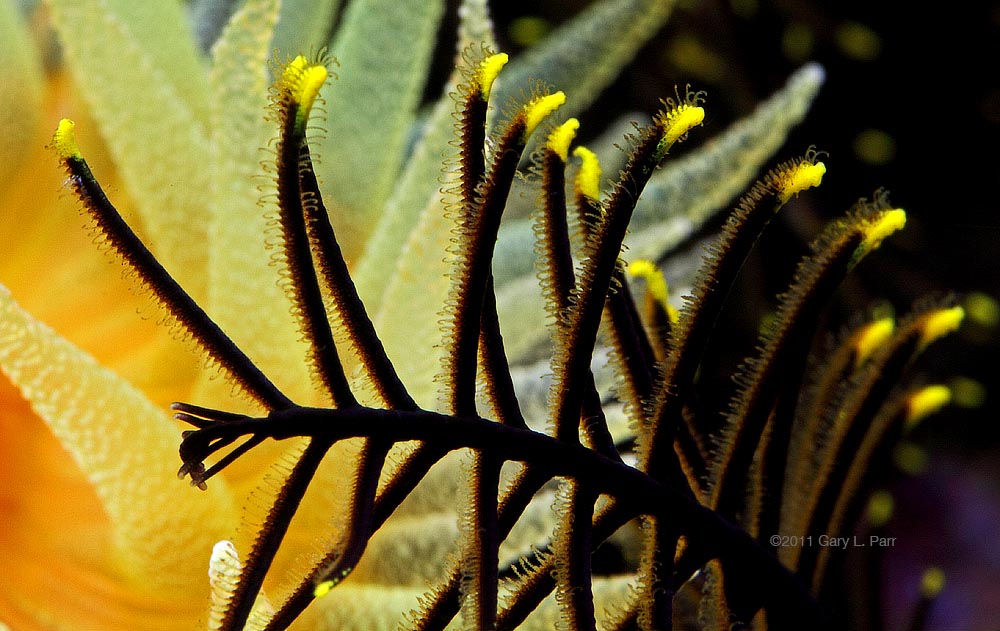 Tube feet on crinoid arm pinnules are used for transportation and to grab food out of the water.

Crinoids top the list of my current favorite reef animals because they are so primitive in appearance but relatively advanced in structure and function. This crinoid was photographed in the azooxanthellate tank maintained by Kevin Kohen at the Live Aquaria/Divers Den facility in Rhinelander, WI.
In my crinoid studies (I currently keep three of them), I’ve learned that there are two basic types. The crinoids you typically see are the ones that perch in the open water. They tend to be more difficult to keep (but likely easier to collect and that’s why they’re more available) because they depend heavily on current flow striking the backside of their arms to efficiently capture food.
The crinoid type show in the photo is a group that tends to hide its body and extend the arms to capture food. They are easier to keep (“easier” is used relatively) because they are more efficient at capturing food in varied currents.
My objective when creating this image was to show the tube feed that line the pinnules. Not only was I able to show them, but got the added benefit of reflected color in the clear tube feet from the Dendrophyllia background. Another thing I like about this image is how the out-of-focus pinnule tips appear in the background, giving the image some depth. Note that I’m making use of the Rule of Thirds in this image by having the main spine of the arm run along the bottom third of the frame and terminate at the lower left third intersection. The yellow tips are  positioned along the upper third line. My hope is that the overall composition causes your eye explore the whole image. Details: 1 sec. at f/22, ISO 400, Canon 7D, Sigma EX180 macro lens with extension tubes, tripod, remote release, mirror lockup, available tank light.–Gary L. Parr, www.gparr.com, www.reefthreads.com

The feel-good story of Yellow Tangs in the wild