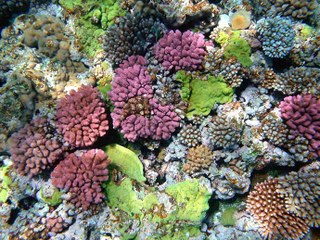 STONY BROOK, NY and STANFORD, Calif., Oct. 3, 2011–Changing human activities coupled with a dynamic environment over the past few centuries have caused fluctuating periods of decline and recovery of corals reefs in the Hawaiian Islands, according to a study sponsored in part by the Institute for Ocean Conservation Science at Stony Brook University. Using the reefs and island societies as a model social-ecological system, a team of scientists reconstructed 700 years of human-environment interactions in two different regions of the Hawaiian archipelago to identify the key factors that contributed to degradation or recovery of coral reefs.

“Historical reconstruction reveals recovery in Hawaiian coral reefs,” which was published online today in the journal PLoS ONE, concludes that historical changes in human societies and their relationships with coral reef ecosystems can explain whether these ecosystems exhibit patterns of sustainability and resilience or decline and degradation. Dr. John N. Kittinger, lead author of the study, was a National Science Foundation Graduate Fellow in the Department of Geography at the University of Hawai’i at Mānoa when the reconstruction was conducted. He is now an Early Career Social Science Fellow at Stanford University’s Center for Ocean Solutions.

“Our reconstructed ecological changes included an intensive review and assessment of archaeological deposits, historical observations of ecosystem conditions, and modern ecological and fishery data,” said Dr. Kittinger. “Using these data sets, our findings demonstrate that we can’t always view environmental degradation solely through the lens of simplistic cause-consequence relationships. In the historical recovery periods we uncovered, we found that human agency is partly responsible for environmental recovery, which shows that not all human-environment interactions lead to irreversible deleterious outcomes and that degraded ecosystems may still retain the adaptive capacity and resilience to recover from human impacts.”

“This reconstruction shows that human-environment interactions need to be included when considering the factors that contribute to the degradation of an ecosystem,” said Dr. Ellen Pikitch, executive director of the Institute for Ocean Science and Professor at Stony Brook University. “Understanding past interactions can be crucial in determining best practices for present-day management of coral reef ecosystems.”

The analysis suggests that in the Main Hawaiian Islands marine exploitation was highest in the early period after Polynesian settlement more than 700 years ago. By 1400, however, reef-derived protein sources became less important than those derived from domesticated animals, and a suite of coral reef resource conservation strategies was implemented by Native Hawaiian societies, allowing reefs to recover. This recovery continued as traditional reef-fishing subsistence practices were abandoned through the post-European contact period after 1778 due to the introduction of epidemic diseases to the Native Hawaiian population. By the early to mid-1800s, however, reefs again went into decline due to overexploitation, land-based pollution, and other factors associated with changes in demography, economic systems, and new technologies. The analysis shows that negative impacts continued and intensified to the present day, exhibiting only a brief reprieve in the 1940s due to the closure of nearshore marine areas during World War II.

“Reefs in the Main Hawaiian Islands have been declining for more than 150 years, and similar degradation that has occurred in other reef ecosystems indicates that we may be approaching a tipping point or threshold, beyond which recovery is doubtful,” said Dr. Kittinger. “If we look at historical ecosystem recoveries, reversing this decline will require protection of a broad range of habitat types over large areas, such as marine no-take reserves. Additionally, appropriate institutions and policies will need to be in place to effectively engage the diverse community of ocean-users in Hawai’i in collaborative marine ecosystem stewardship.”

Unlike the Main Hawaiian Islands, researchers found that coral reefs in the Northwestern Hawaiian Islands (NWHI) have long functioned as a geographic refuge due to their isolation and limited human population. They also benefited from cultural protection as a sacred ancestral homeland in Native Hawaiian society. The analysis shows that they did, however, suffer from some of the same negative impacts of the post-European contact period as coral reefs in the Main Hawaiian Islands. After World War II, however, reefs in this region began to recover from historical impacts due to human depopulation in the area, conservation efforts, and decreases in commercial activities involving the reefs. NWHI reefs are now among the most diverse and abundant coral reef ecosystems in the world, and provide an example of how healthy reefs that have recovered from human impacts can look.

“The substantial resilience and adaptive capacity of coral reefs demonstrated in this study provide reason for hope and suggest that we should not dismiss the possibility of bringing even the most degraded reefs back to health,” said Dr. Pikitch.

Photos of healthy and degraded reefs in the Hawaiian Islands are available by request.

The Center for Ocean Solutions (COS) works to solve the major problems facing the ocean, and prepares both current and future leaders to take on these challenges. It is a collaboration among Stanford University (through Stanford’s Woods Institute for the Environment, http://woods.stanford.edu/ and Hopkins Marine Station, http://www-marine.stanford.edu), the Monterey Bay Aquarium, http://www.montereybayaquarium.org/ and the Monterey Bay Aquarium Research Institute (MBARI), http://www.mbari.org/.

The Institute for Ocean Conservation Science at Stony Brook University is dedicated to advancing ocean conservation through science. The Institute transforms real-world policy while pursuing serious science, both of which are essential for ocean health. For more information, go to www.oceanconservationscience.org.

The University of Hawai`i at Mānoa serves approximately 20,000 students pursuing more than 225 different degrees. Coming from every Hawaiian island, every state in the nation, and more than 100 countries, UH Mānoa students thrive in an enriching environment for the global exchange of ideas. For more information, visit http://manoa.hawaii.edu. Follow us on Facebook http://www.facebook.com/uhmanoa and Twitter http://twitter.com/UHManoaNews.