By Ricardo Pinto 9 years ago5 Comments 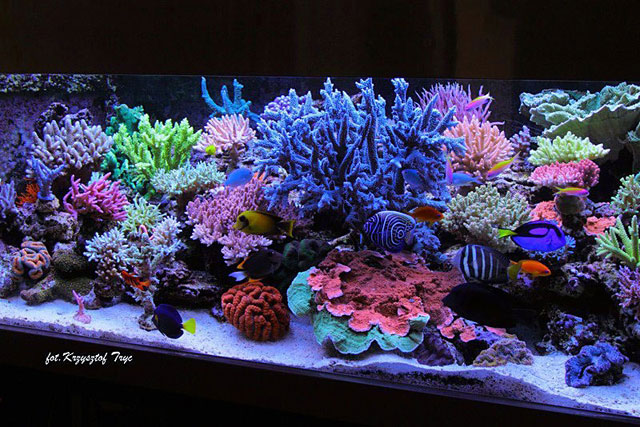 Chopin, Marie Curie or Pope John Paul II are distinguished  Polish personalities.  But how about our world…. Are Polish people also notable in reef husbandry?

Over the last years, I have the chance to come across a few Polish tanks. Most of them had a singular characteristic – they feature coral colors from another world!

One of the reefs that clearly exemplify what I’ve just said is Krzysztof’s Reef Tank.

Krzysztof setup his 750L (200 gallon) reef about 5 years ago, in 2006. Among these years he presented regular updates and his tank was always impressive.

For filtration, in the first 4 years he was using the full Zeovit method and  Korallenzucht Revolution M protein skimmer. Currently, he has changed from Zeovit to NP-Biopellets and PO4x4 remover. He told me that he was happy with Zeovit but one day decided to try NP-Biopellets because it was effortless, and because the results were similar he kept biopellets. He has also changed the KZ skimmer to a Red Skim 250 from a Polish manufacturer.

For Calcium and Alkalinity supplementation he runs “Balling Method”, similar to 2-part solution but with a third solution of NaCl free salts, via Grotec III doser.

As maintenance, he does a weekly 10% water change and replace activated carbon monthly.

In conclusion let me quote Krzysztof, with a statement he did a couple of years ago:

“Before starting zeovit method I tried various other methods and technologies and never had real trouble with keeping low level of NO3 or PO4 regardless of the way of tank running.  I even tried for a year a skimmerless system with Miracle mud and Chaetomorpha in refuge. Although it worked for me I’ve decided to come back to the previous solution, i.e. with a skimmer.
Some aquarists look for a simple way to success, so they ask: How can I achieve that? Success depends upon many factors such as knowledge, patience, ability to draw right conclusions from observation, routine maintenance, keeping stable water conditions, appropriate equipment, etc. There is no magic formula for success, it needs plenty of your involvement and doesn’t occur so quickly.”

Check the video from last year when he had HUGE SPS colonies:

I am from Portugal (EU). I am a medical doctor and I also run the European reef blog H2O + Something. I´ve been a hobbyist for the past 15 years. I´ve started with freshwater aquariums - planted aquariums and African cichlids - and I´ve been doing reefkeeping since 2004.