A closer look at the snakefish

Congratulations to Jeffho13 for correctly identifying the snakefish last week.  As promised, here is some more information on the ecology of Trachinocephalus myops. 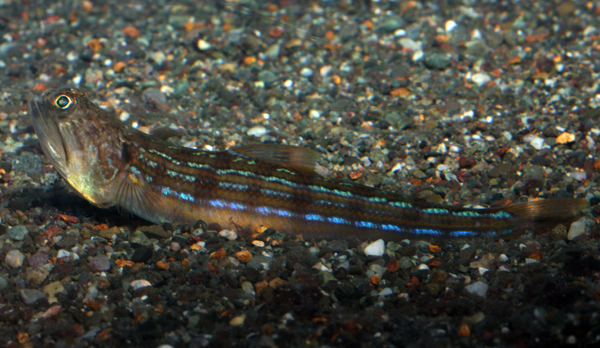 Snakefish caught in Shinnecock bay by aquarists at the Long Island Aquarium in Riverhead, NY

The snakefish Trachinocephalus myops is found worldwide in warm and temperate coastal waters, from the shoreline, to a depth of more than 400 meters.  It belongs to the family Synodontidae, the lizardfishes.  Like the other members of its family, the snakefish is elongate and slender with a roughly round cross section and a large oblique mouth lined with many small teeth.  They have a single triangular dorsal fin with no spines, and a small adipose fin.  The Synodontids are ambush predators that lie still on the sea floor until a prey animal passes overhead, at which time they dart off the bottom to attack with impressive speed.  Some species, including the snakefish, spend most of the day buried in the sand with only their eyes and the tip of their mouth exposed.  T. myops is easily distinguished from the other members of the Synodontidae as it has a much shorter snout, a more oblique angle to the mouth and an attractive pattern of alternating yellow and blue lines. The snakefish reaches a length of around 40 cm (15 in.).

The unique shape and behavior of the snakefish, as well as its attractive coloration, lend it some appeal for the aquarium, especially if you’re one of those collectors of oddball species, however it is virtually unavailable in the trade.  This is probably for the best, as its explosive lunging behavior when startled or chasing prey puts it at extreme risk of jumping.  Even in a well-covered tank, the speed with which it launches itself off the bottom makes a dangerous collision with the cover or a tank wall all too likely.

Locally in New York, the snakefish is often seined up alongside its close relative, the inshore lizardfish Synodus foetens in shallow sand flats and eelgrass beds.  Both species are also caught by anglers fishing for flounders and other benthic inshore fishes, although neither species is considered a food fish.  Both T. myops and S. foetens are believed to be tropical strays here, carried by the Gulf Stream as larvae, to the waters of New York and New England to live out their abbreviated lives for as long as the water is warm enough to support them.

Destination Reefs: Where in the world? [video]