Were Marine Diatoms the Inspiration Behind Hitchcock’s “The Birds” 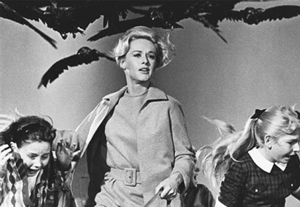 The Birds is a 1963 film depicting the crazed and unprovoked attacks of sea birds on the residents of a small coastal village (Bodega bay in California). One of the key features of the movie is the apparent suicidal attacks of the birds as they fly headlong into windows and doors of the town’s residences. While at first sight, such a scenario seems somewhat far-fetched, it appears that truth is often stranger than fiction and that art often imitates life.
On august 18th, 1961- two years before the production of the Birds, residents of Capitola California discovered hordes of Sooty Shearwaters that had apparently become crazed and died en masse as a result of slamming into buildings and other structures. The streets were literally covered with dead birds. Of course, this incredible phenomenon was recorded in the local newspapers before finding its way to the desk of Hitchcock, who used this premise as his movie plot. It has, however, taken close to 60 years to discover the underlying cause of the crazed flocks.
Recent Research published in Nature Geoscience would appear to shed light on this mystery. “I am pretty convinced that the birds were poisoned” commented Sibel Bargu of Louisianna State University at Baton Rouge, after leading a team that found naturally occurring toxins in the stomach contents of other marine animals collected at the same time. In the published results, they showed that almost 80% had toxin producing plankton within their guts and that the toxin, in this case, was likely domoic acid- the key toxin in the human condition known as amnesic shellfish poisoning. The acid was likely produced by marine diatoms, accumulated by filter feeders and other planktivores which were in turn consumed by the birds. Similar to the human condition, these caused disorientation and confusion resulting in flocks of birds apparently crazed and hitting buildings. While acid poisoning had been suggested previously, the study by Bargu et al. provides the most compelling evidence for a link. It had previously been suggested that leakage from faulty septic tanks may have resulted in unusually high diatom blooms in the local coastal waters during the late ’50s.  A scenario somewhat similar to that recently reported for coral deaths in the Florida Keys.
One last twist in the development of the movie “the Bird” is that the film is also based somewhat loosely in a 1952 novelette by Daphne DuMaurier, where crazed birds all over England go on the attack. So, we have a curious case of fiction becoming fact becoming one of the Top 10 Thrillers of the 20th Century (American Film Institute).

Flexit: One utility LED to rule them all