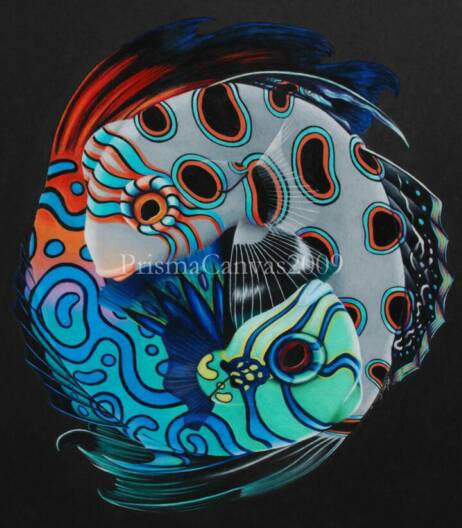 Several years ago I had the pleasure of meeting PrismaCanvas artist Kaitlyn Cameron. At the time she showed me a few pieces of art she had done including a most exquisite declivis butterfly as well as a few other small pieces she had been commissioned to do. It was immediately clear that she was in fact a talented artist paying great to attention to detail in her work. Recently she has focused almost entirely on marine creatures and with each piece her skills are both growing and showing through. This month she has begun work on a new piece, a Nautilus, which she is currently documenting the progress of on her facebook page. Unlike most of her art, the Nautilus is one piece she is doing for herself as opposed to being a commission. Once completed however, prints will most certainly be made available.
The main image accompanying this article is a piece that Prismacanvas created for me several years ago. It is pencil on a black background measuring approximately 24 by 36 inches and is a stunning representation of a ying-yang symbol, mandarin style. This was born out of an idea I had many years ago and is an absolute gorgeous piece. In addition to the Nautilus, she is also working on a commissioned Leafy Sea Dragon which can also be seen on the facebook page. Anyone seeking specific marine based art should check out the work of Kaitlyn at Prismacanvas. Questions can be forwarded to her directly by email.