Ice fishing … under the ice? [video] 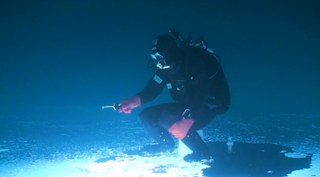 Ice fishing – under the ice?


This video was shot by Juuso Mettälä at Lake Saarijärvi in Vaala, Finland. All-in-all, the video took six divers to film: three actors, the cameraman (Juuso), and two safety divers.

It took me a bit of time to figure out what they were standing on and what they were scooping and pouring. The shift in perspective throws you for a loop until you pick up on the visual cues for what is actually happening.  🙂

I should note that the wheelbarrow, balloon, and rubber duckie were all saved from the lake after the shoot and are sitting safe at home with Juuso.

Inside a Coral Farm