Recently I was asked to use and review a couple of products that are manufactured by Polyp Lab, a marine aquarium supplement manufacturer that is located to the north, in Canada and according to their “About Us” page found on the web site, create products for the advanced aquarist and are ” (a team which is) perpetually working on new products. (Being hobbyists ourselves) with backgrounds in marine biology and aquaculture, we have the means to bring cutting edge innovations to your reef.”  Personally I had not heard of Polyp Lab before I was asked to try out the products, or if I had I hadn’t paid attention to them. So when the two bottles of  product arrived I was a bit skeptical.  Considering I had no idea what was coming I thought it a good idea to do some background checking. When I read the claims of the excellence of Reef-Roids I could not wait to get some in the tank. 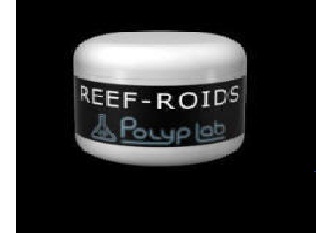 Polyp Lab Reef-Roids Engineered Coral Food is a blend of naturally occurring marine plankton and claims to contain a zoo-plankton “unique” to their product. What ever that means. Polyp Lab also claims that it is formulated to minimize water degradation.  It is pretty much intended to feed all filter feeding life in your reef aquarium and either target or broadcast feeding are recommended methods of using the food. The company claims that with continued use your corals will show accelerated growth and better coloration.

My normal regiment of feeding is a rotation of various plankton based foods. I stopped all use of any other coral food for this test and began to monitor water quality weekly during the use of Reef-Roids.

All of the feeding I do is broadcast. I don’t have time to stop pumps and feed individual corals with a squirt from a turkey baster. Instead I stop the skimmer and the MP-40, mix and dump. I do leave the return pump running because I like to get the pods down in the sump some food to keep the populations up.

I fell in love with this dry powder after the first week of use. It in my opinion has so far out performed other similar products I have used. The claims of better coloration and growth are a strong possibility, especially the color claim because I have noticed improvement in both in the last month. But I cannot completely give credit to Polyp Lab Reef Roids simply because I’ve recently improved the lighting over my reef and the tank itself is getting to the age where in my experience, stability really begins to kick in and things take off.

But in any case, I fed this product two times per week along with the normal foods I give my fish. There was no unusual rise in nutrients which to me says a lot considering the method I use to feed and the amount of food that potentially is left to waste and decay.

I will not exclude the other coral foods I’ve relied on over the past years but instead I will definitely be adding Polyp Lab Reef-Roids to the mix.