By Paul B 9 years agoNo Comments 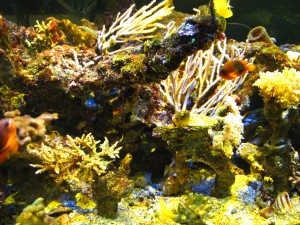 Biodiversity.  I am fascinated by this.  I also think it is a cool word.  But for us aquarists it is restricted to marine animals, some good (for our tanks) and some bad (for our tanks).  All animals are good for something, at least they think so.  Even parasites have a purpose and a niche, although I can’t think of one at the moment.

Looking at an aquarium we first notice the fish, then the corals and rocks and as we get closer and more interested, we can barely pick up movement in darker areas.  Under and between rocks, crawling or slithering through the substrate, these are the things that fascinate me.  Yes I have some fish and corals but they are common, everyone knows all about them and we all have or had them or at least seen them.  But the creatures from the darker zones, that’s where the real action is.

In my reef there are maybe 18 fish, but I would imagine that for each fish there are a hundred brittle stars, fifty bristle worms, a thousand amphipods and possibly a million copepods.  I never counted so don’t hold me to those numbers.  We rarely look at a tank and say “Wow what a cool amphipod that is!”  Well I do, but I am a little strange.
Take a brittle star for instance, very cool animal.  They hang out all day under a rock with one or two arms sticking out.  I am not sure why they are hiding because almost nothing eats them.  I guess it is because even though the fish don’t eat them, they do pick them up, chew on them, then spit them out.  Maybe that is the reason they hide.  Good reason, anyway, how do they even know they are hiding?  They have no eyes, no brain, and no ears.  They don’t even have a lateral line like all true fish have to help them get around.  Instead of those sensors they have others more suited to a bottom dwelling animal.  Even without eyes they can sense light.  We can also if we just close our eyes we can tell light from dark.  But what really fascinates me about these and animals living in similar habitats is the fact that even without a brain, they are so much better at some things than we are.  Maybe not basketball or pole vaulting but their ability to find food.  We humans can smell certain foods from a few feet away but if you put blindfolds on us and put us in a room with 4 or 5 fans blowing the air all over the place I doubt we would know where the food was.

Snails and crabs can, as can brittle stars and bristle worms.  Sharks can do that with blood and they can sense electrical signals but they have a brain, I have a small tank with local snails, worms, crabs and shrimp.  There is a small powerhead in there, and if I throw in a pellet, in about 5 seconds the seemingly sleeping snails all turn in the direction of the pellet and “race” to the exact place, trying to beat out the crabs.  I don’t know how much a dry pellet smells but I don’t think it is all that much but I really don’t have any idea how these “lower” animals can know the direction to go.  Especially with the water swirling about, but they never falter, they know exactly what direction to go.

Amphipods are another cool animal.  Most tanks don’t have these as I collect them in the sea, they are different from copepods that are in all tanks as they are many times larger.  We tend to call anything tiny a copepod but they are not all the same.  Many of them are the young of crustaceans and most of them will die in a tank long before they get much larger than a real copepod.  They haven’t yet mastered the art of growing up away from the sea which is the reason we don’t see baby hermit crabs or coral banded shrimp all over our tanks.  Hermit crabs and shrimp spawn all the time as do all crabs and shrimp but the babies all die in a few days.

It must be frightening to be one of these animals, Oh wait, they have no brain so I guess they can’t be frightened, good thing too because as a brittle star lays around waiting for a meal there are also, in the same hole bristle worms.  They crawl all over each other but they don’t seem to mind.

I guess these creatures make better neighbors than some of us.

I hate to say it but I have been keeping fish from about 1954 or so. I Was drafted in 1969 and was in the Army until 1971 and when I returned back from Viet Nam I bought my first salt water fish started a tank, that tank is still running. I Did my first SCUBA dive in Sydney Australia while I was on R&R and became certified in about 1979. Most of my dives were for lobsters in NY waters with about a quarter of them in the tropics. I am also a boater and a Lisenced boat Captain. I made my living as a construction electrician foreman in Manhattan from which I recently retired.