New snake eel species named for diver that discovered it 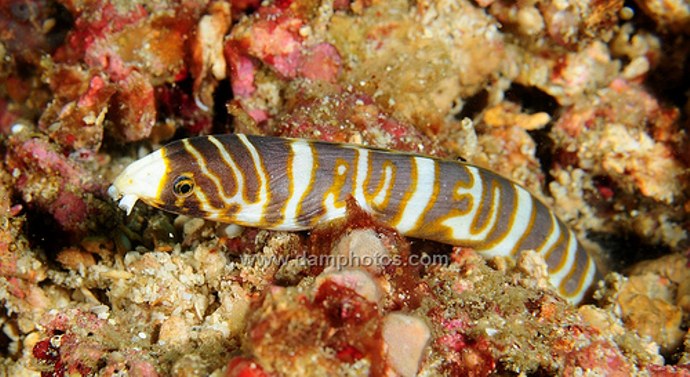 
The new species of snake eel is now know as Peri’s Snake Eel (Myrichthys paleracio) and is unique from other snake eel species because of its white and brown coloration, vertebrae number, and it’s elongated body.  The full results for this species description were published in the January 2012 International Journal of Ichthyology.

The two specimens that were submitted for examination were collected in shallow-water coral reefs from the Verde Passage, southern Luzon Island, Philippines. Dr. Gerald R. Allen of Perth, Australia, and Dr. John E. McCosker of the California Academy of Sciences were the two researchers that verified the new species identification bringing the snake eel species count up to eleven.

It was Dr. Gerald Allen, Roger Steene (another underwater explorer), and Paleracio that made the discovery. Paleracio recalls: “I tried catching it with the net that we are using to other fish but this one is not that easy. It is very slippery, and can escape from your grip easily. … It was a struggle for me to get it alive. When I caught it, I barely had enough air in my tank to reach the surface.”

After examining the submitted snake eels, Allen and McCosker decided to name the new species after the person that caught them.

“Having a snake eel named after me is something. I feel really lucky than honored actually,” said Paleracio.