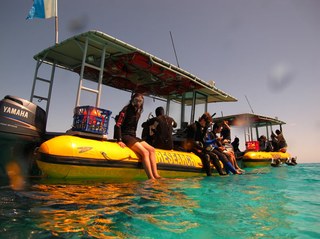 Student divers do homework on the GBR

As part of their academic requirement, undergraduate students from UQ’s School of Biological Sciences BIOL3211 class choose a Great Barrier Reef invertebrate species of their choice to study and document on UQ’s website, Great Barrier Reef Invertebrates.  The project began in 2011, so the website is currently sparsely populated.  Future classes will continue to fill the gaps, thus creating a large crowd-sourced student-sourced body of data on GBR’s incredible biodiversity.

Now where was this class when I went to college?!

Undergraduate students from The University of Queensland’s School of Biological Sciences have embarked on a project to document the unique biodiversity that exists in Australia’s coral reefs.

Those enrolled in the Undergraduate Program in Marine Science have developed a website that describes the Great Barrier Reef’s invertebrates in detail.

“Although colourful fish and corals tend to grab the attention of the public, the huge bulk of animal diversity on the reef comes in the form of snails, worms, starfish and crabs,” Professor Degnan said.

These research findings are then published on “Great Barrier Reef Invertebrates”, the class’ website dedicated to describing their biology.

“These undergraduate projects and web pages are accessible to students, researchers, and future employers from around the world, and form an important part of a marine students’ undergraduate portfolio,” Professor Degnan said.

Alyssa Budd was one of the students who participated in this course.

“Excited that my project may already be underway, I quickly popped them in a sample container in the hope that I would later be able to learn how to study them in the lab,” Ms Budd said.

Ms Budd said the guidance provided to students in the course provided an exceptional learning opportunity.

“With the assistance of the course coordinater himself, a few crazy hours in the lab and a lot of research effort I managed to produce a webpage that was up to scratch and run a developmental experiment that provoked my interest in invertebrates.”

This project is supported by a UQ Strategic Teaching and Learning Grant.