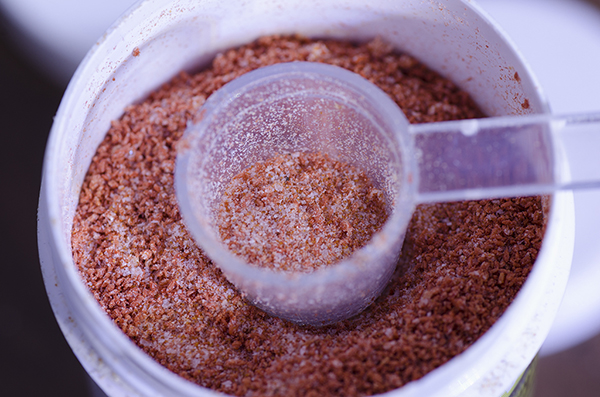 We know much more about coral needs than we did few years ago, there’s no doubt about it. Advancements in lighting technology as well as water flow allow to keep and propagate more demanding coral species in a captive environment. But corals in the wild thrive not only on sunlight and ocean waves, but also on tiny plankton floating in the water, in which they feed on. Aquarium food manufacturers are coming up with new types of food made especially for sessile invertebrates on a regular basis. One of them is a subject of today’s review, a product called Coral V-Power from Preis Aquaristik.
http://www.youtube.com/watch?v=lwQFokwtyWI

A little bit about the company- it was founded by Klaus Georg Preis in 1967 in Germany. This manufacturer only recently started importing it’s products to United States but it’s a well known and respected company in Europe with a long history of fish-keeping related products.

I’ve tried many  supplements purposed for corals and by far the only measurable way I could test them is the feeding response- if I see corals react to the food I’m throwing at them (by means of feeding tentacles extended to catch the food)for me it is good enough reason to believe it’s working( assuming that I don’t see the same coral dead the next morning- but that would be called poison, not food) By experimenting with various types of pellets, liquids and fine powder coral foods I found only two that really make a difference in coral growth and health. Both are designated for long polyp stony corals, or LPS. I tried quite few SPS blends, but none of them induced a feeding response in my stony corals and I could never be sure if SPS polyps really feed on the stuff I’m serving them. This was true until I got my hands on Preis Aquaristik Coral V-Power food…

I have to say upfront, I’m really excited for this product. I don’t want the whole review look like an infomercial, therefore I’ll try to prove this thing really works on my corals. But first things first. Let’s take a look at the packaging and see what it says: 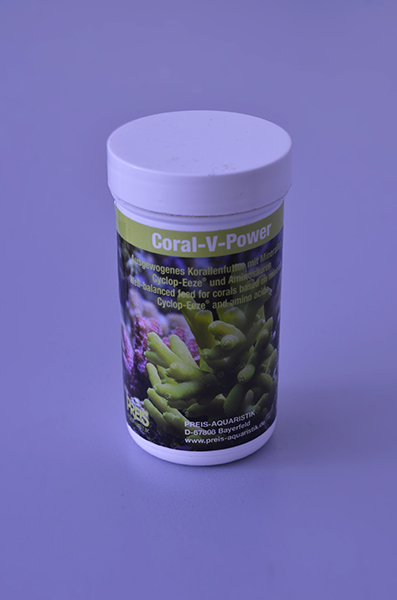 V- power comes in two sizes, 60g jar and 400g bucket. I’ve received the small, hobbyist targeted jar for this review. After opening the jar there is another plastic seal and printed instruction. Underneath we have a red-colored fine powder with a nice, fishy smell the rest of your family loves so much. Somewhere inside, buried in the powder, you can find a measuring spoon. It’s a little tricky to get it out without spreading the food all over the place (good test for those shaky hands and again, your spouse loves you for when she/he finds it on the floor while cleaning). The label clearly says what’s on the menu- proteinogenic amino acids (arginine,glycine,leucine,niacin,riboflavin), fatty acids including Omega-3 and Cyclop-eeze, trace elements, minerals and vitamins. Yummy!

As you see, most of the ingredients are supposedly what tiny SPS like, but it doesn’t prove they feed on the stuff. I’m a hobbyist without a laboratory in the closet, so the only way I can tell corals like my food is the previously mentioned feeding response. And because they say a picture is worth a thousand words, I give you a motion picture and a couple of shots. This is what happens to my SPS a little over a minute after I squirt V-power in the tank with all pumps turned off.

Milleporas and various types of acropora species are releasing slime to catch the food floating in their proximity, while others close their polyps just like LPS do. I’ve never seen such response in hard corals with other types of foods I tried to feed them with. Even my acans and chalices extend feeding tentacles to grab their share. 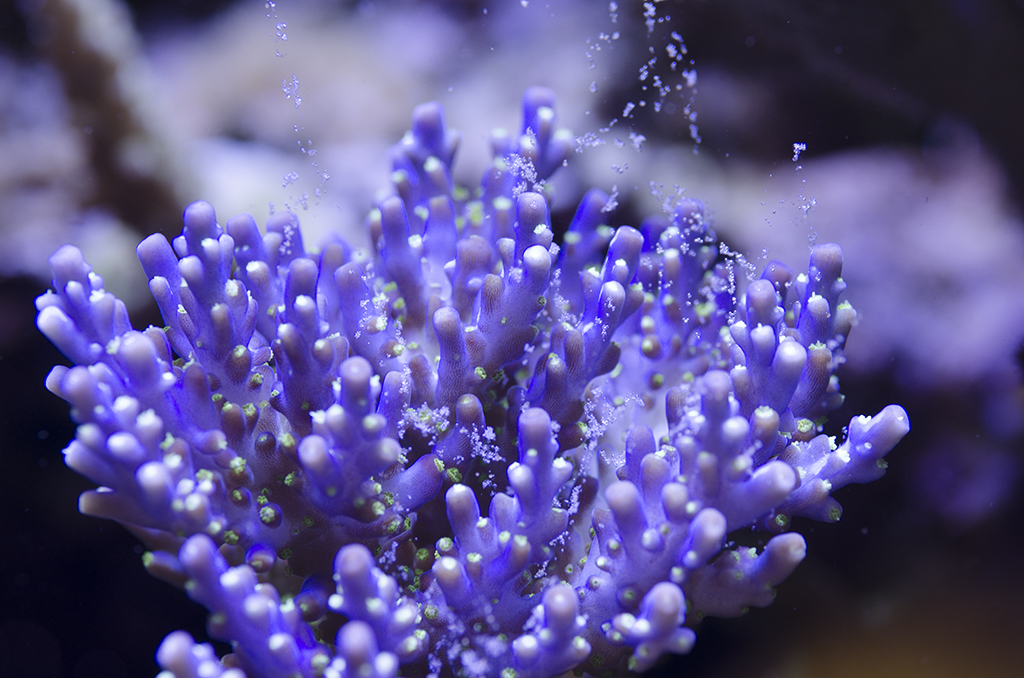 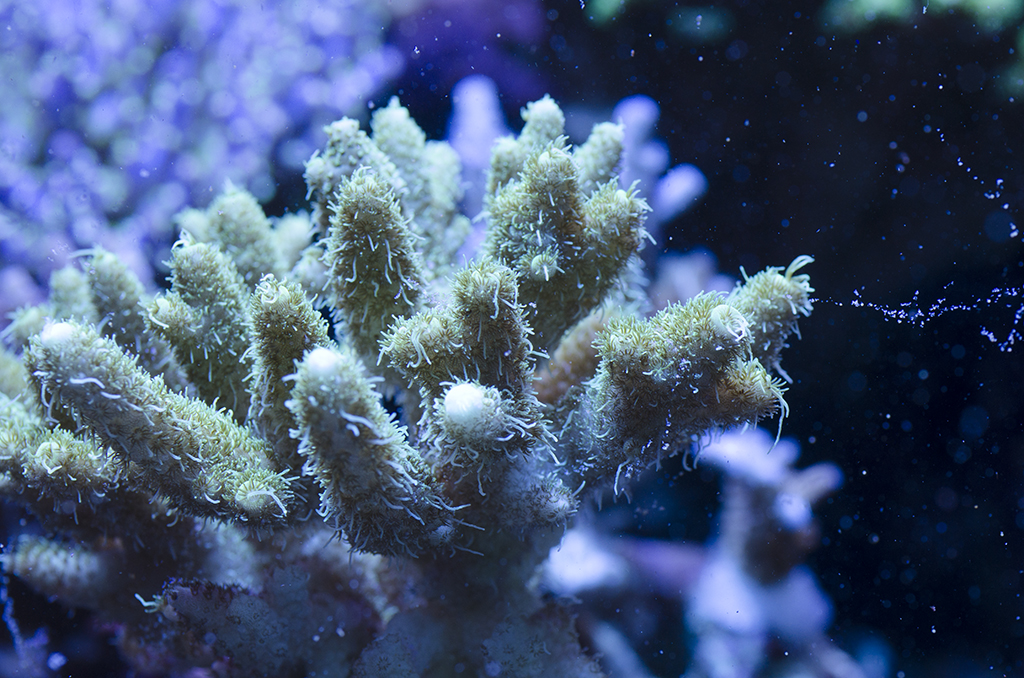 So where’s the catch? I didn’t find any. I can’t say if Preis Aquaristik Coral V-Power help with coral growth rate because I didn’t test it for an extended period of time yet, but I can assure you my corals like it. Does it release phosphates? I don’t know (again, the lack of full size laboratory is blocking me from telling you that) but even if it does, I can live with that as far as I see my hard corals going crazy whenever it enters my system. The only minor disadvantage I can find is the cyclopeze that are part of this food blend tend to float on the surface for some time, but good 5 minute soak in aquarium water highly reduces this occurrence. 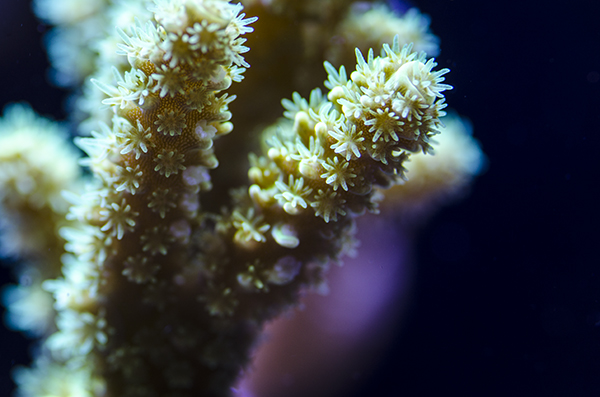 Finalizing, Germans yet again came up with a great product and I highly recommend Preis Aquaristik Coral V-Power food to anyone looking to supplement hers/his SPS collection with quality food blend. Meanwhile, I can’t wait to get my hands on Preis Aquaristik soft corals blend. 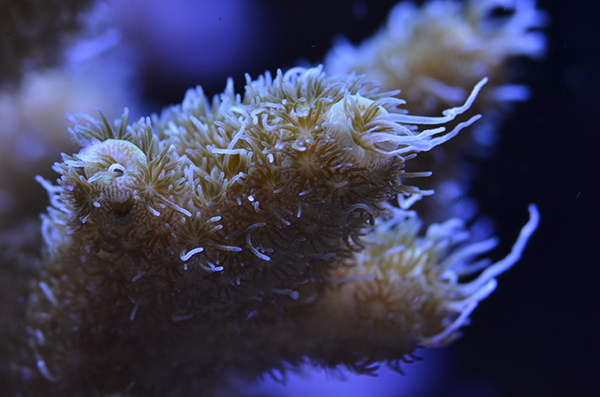 To find more about Preis Aquaristik products and where to buy them, visit their US website www.reefomania.com. Now I need to wake up in the middle of the night and feed my corals with V-power. That’s gonna be a feeding frenzy!!!