By Todd Gardner 9 years ago5 Comments 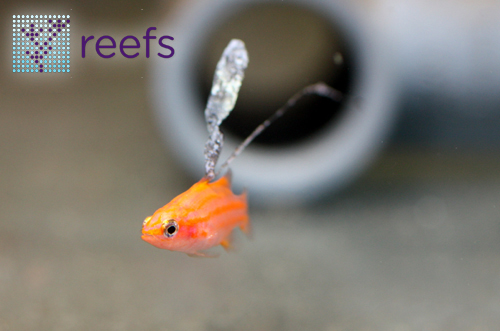 After a staggering larval period of 126-143 days, three of the candy bass larvae at the Long Island Aquarium have finally reached settlement.  They still have not fully developed their characteristic stripes and they are still wielding dorsal filaments and sacs, but they have taken on a benthic existence and have begun eating frozen Cyclop-eeze and small mysid shrimp.  Considered by many to be the holy grail of the grouper family, this colorful little bass often retails for more than $1000 (US). Don’t expect this exciting news to have any impact on that price in the near future. Between the high larval mortality and a larval period around twice that of the closely related swiss guard bass, Liopropoma rubre, the candy bass is still a long way from commercial viability.  Nevertheless, I am considering this a victory and I will be celebrating accordingly with some Bombay Sapphire tonight.  For more details on the history of this project and spawning and rearing techniques, check out the summer issue of reefs magazine, or come hear about it in person at the MBI workshop on July 28th.

Check out some video shot by Peter Schmiedel of one of these larvae about a week before they settled: Candy bass video