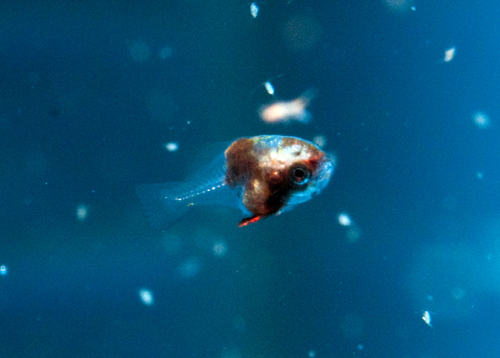 For me, the most exciting part of collecting pelagic eggs and larvae from a large community tank like the 20,000-gallon reef tank at the Long Island Aquarium, is watching the larvae grow and trying to figure out what they are before they reach settlement.  Recently we got a great haul of eggs that hatched into some very interesting larvae.  As we watched them grow – unusually fast, our excitement grew proportionately.  Their relatively deep bodies and large, heavily pigmented pelvic fins really set them apart from the rest of the larvae in the tank.  I could tell by their morphology that they weren’t angelfishes or tangs, but there are so many species from so many families in that tank, that that didn’t help to narrow it down much.  They reminded me of damselfish larvae, but I knew that was unlikely because these larvae came from pelagic eggs and as far as I know, all damselfishes are benthic spawners. 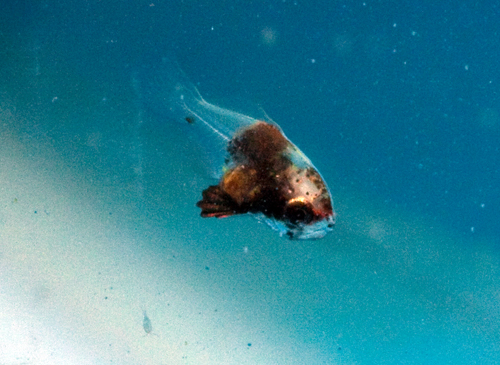 Well, luckily we didn’t have to wait too long.  After a couple of more weeks, these things were overwhelming the 250-gallon rearing tank and had outcompeted all of the other species for available food. I’m not going to pretend I wasn’t disappointed when I finally figured out what they were, but of all the species in this tank – one of the most impressive reef tanks in the world…did it have to be the monos (Monodactylus argenteus)?

Really – who puts monos in a reef tank.