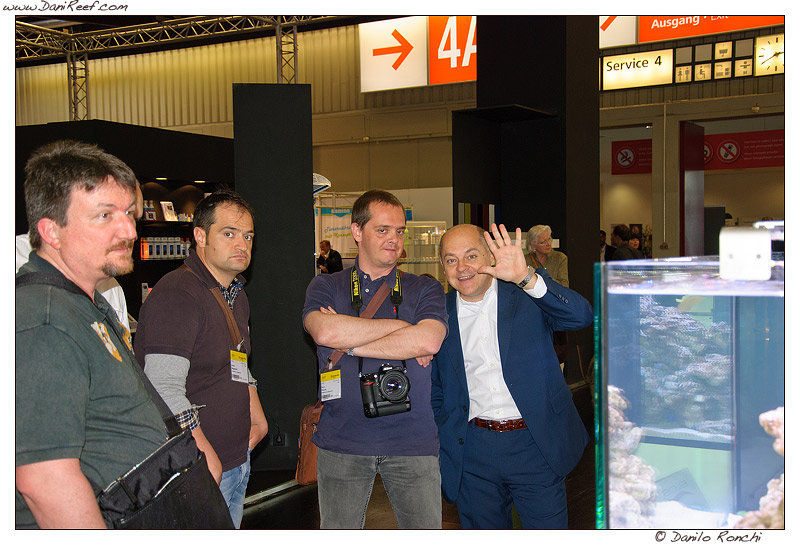 Continuing our comprehensive reportage about Interzoo, we arrived at the hall 4 where we saw the Elos booth. In the picture above the owner of Elos, Dr. Nicola Gandini, on the right, cheerfully greets us.

As always, the Elos booth has been full of news and it was a pleasure to photograph everything we could. The design of Elos products is linear, simple and extremely appealing. As we have already written on the occasion of our editorial, we look at maturity of this company and the desire to innovate that seems to be part of its DNA. 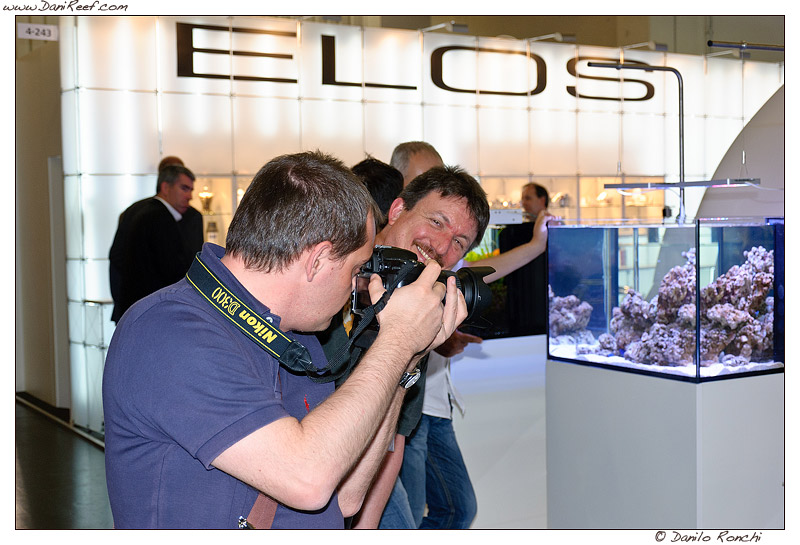 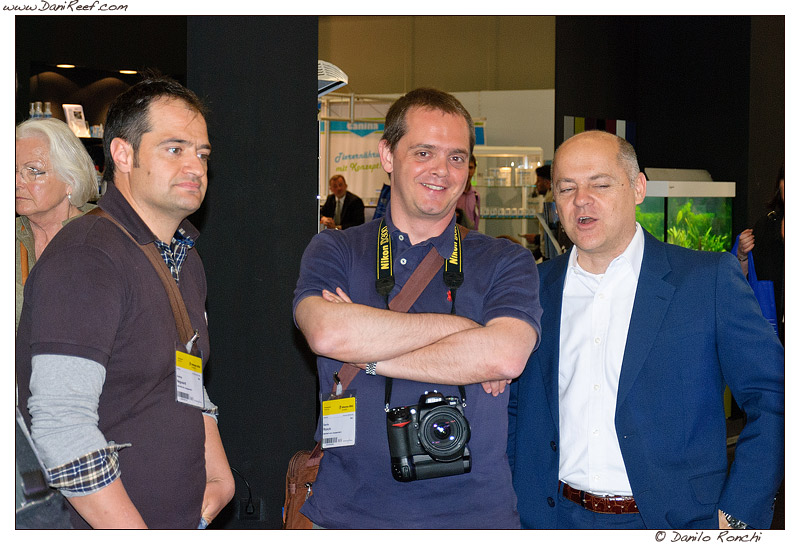 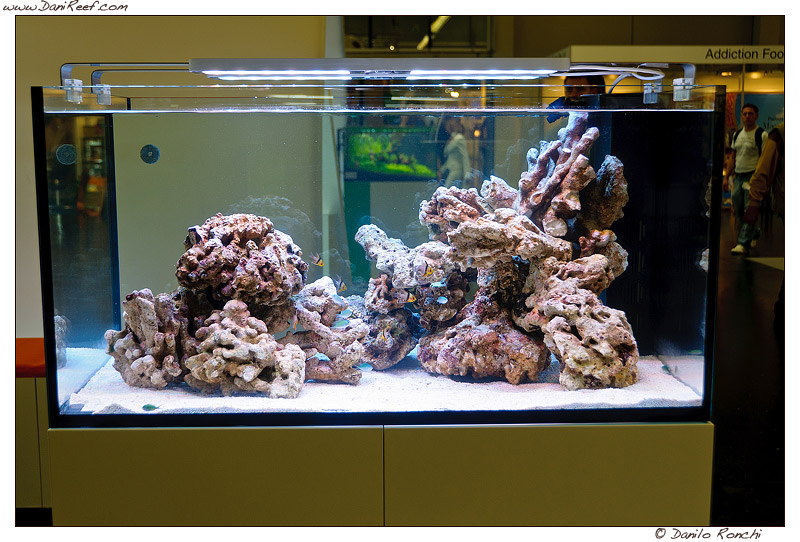 Elos has finally introduced the System 100, a 100x57x50 (h) cm, aquarium already present in some European catalogs but not yet introduced worldwide. Above, the new System 100 can enjoy the new E-Lite3L which we have already spoken of (read more: Elos is breaking the rules with the incredible new E-Lite3), but finally we see it live. 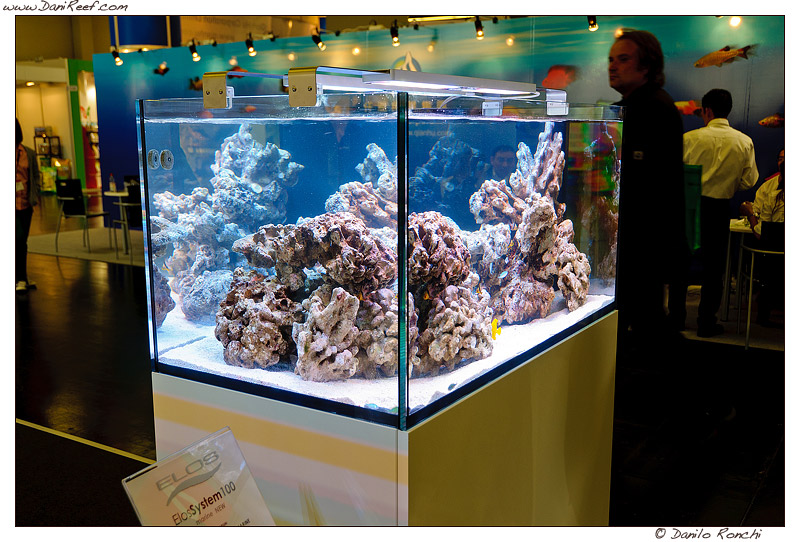 And finally we have the pricing for the new E-lite3L, 615 euros + VAT with 24 white LEDs Cree XP-e, and as we have seen can be expanded with 6 LEDs modules, ranging from 63 to 87 euros per module depending on the chosen color. 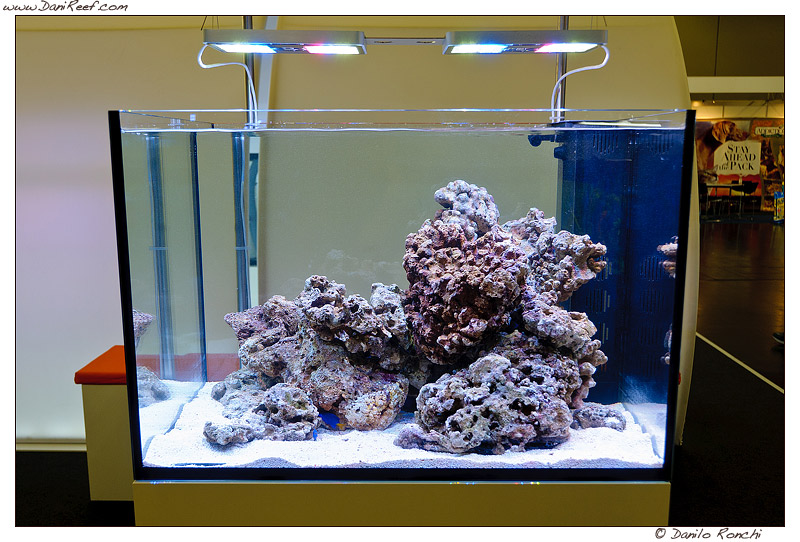 At its side is the new Elite3S, here connected with one of many accessories sold separately. But we will speak of Elite3 more in detail later. 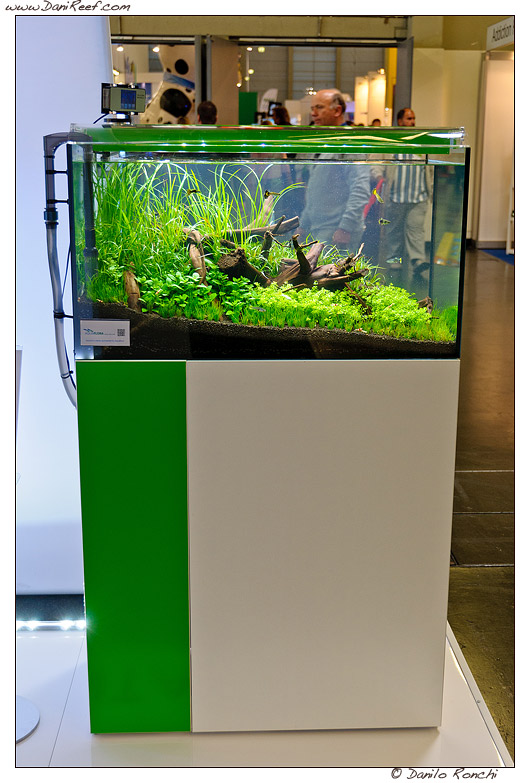 Here we introduce the new Concept80, recently announced  Elos (read more: New Elos Concept80: the new way to build our aquarium). The aquarium is fully customizable with many options, starting from the tank, the overflow, the lighting, the choice of filters and sump. The version seen here is in Acid Green with a beautiful layout created by Filipe Oliveira (FAAO Aquascaping). 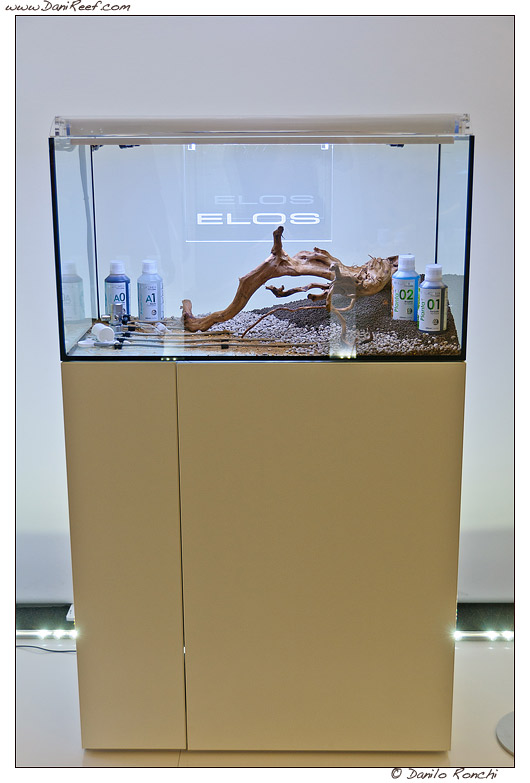 Here the white version with new products for fresh water inside. 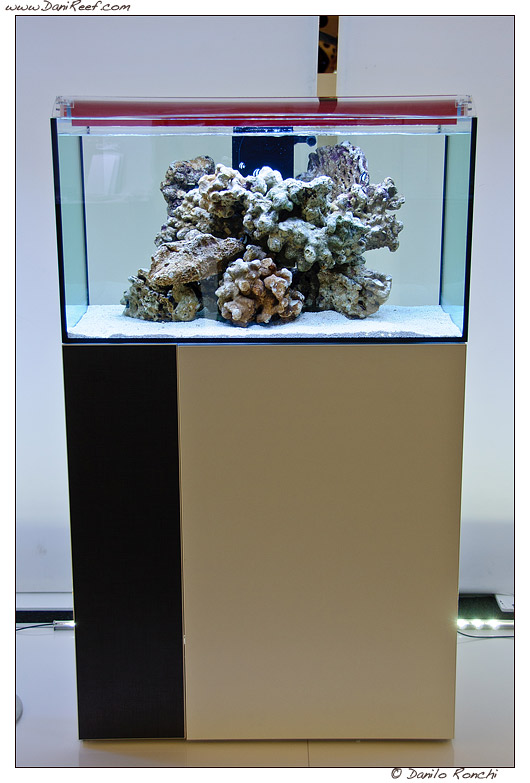 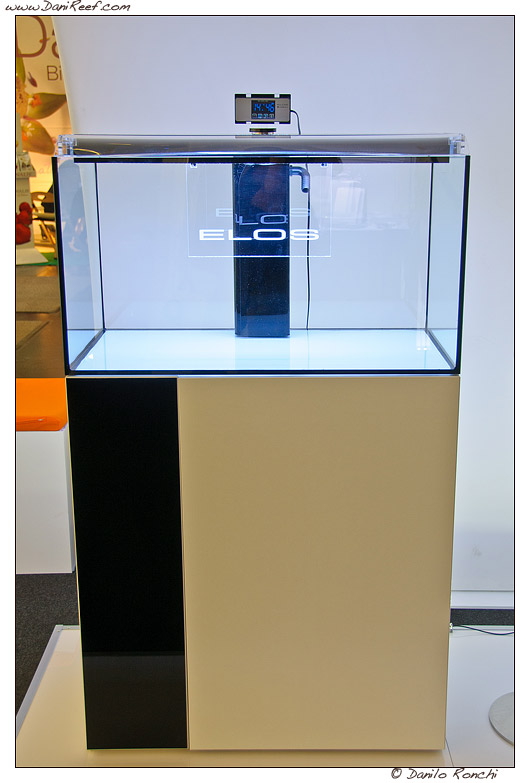 The same aquarium with the new controller Evision 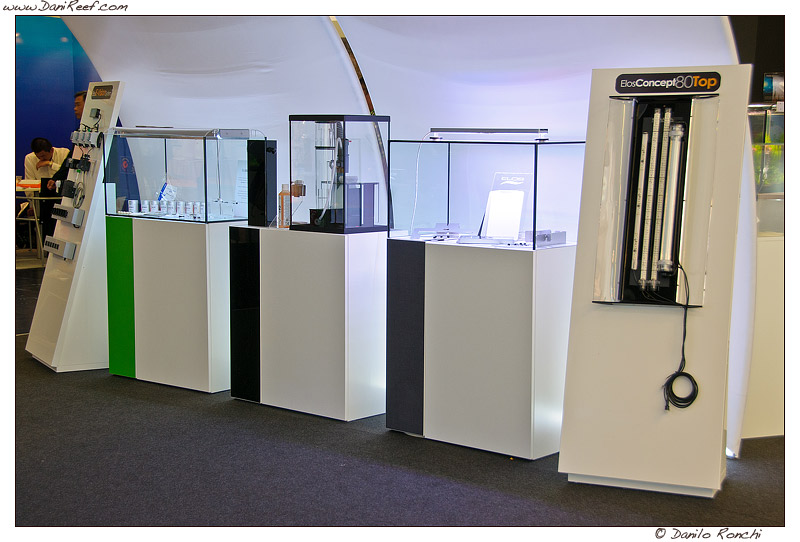 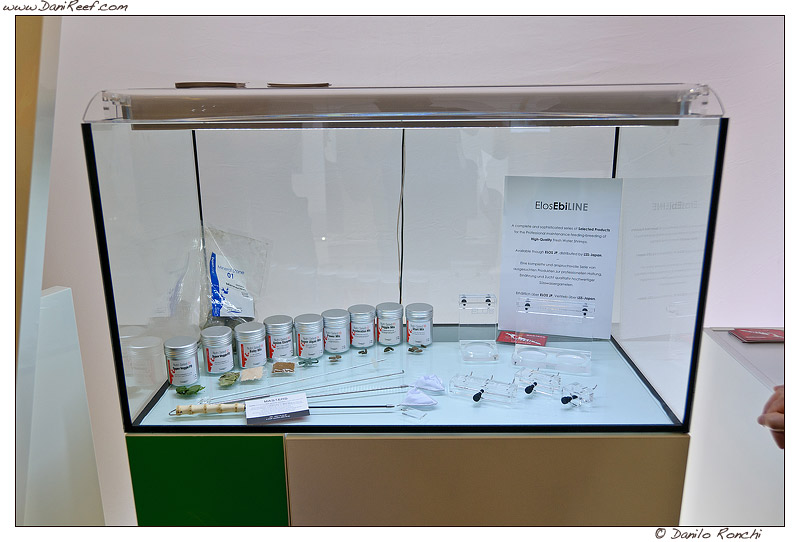 Here again a Concept80 with the new line of products called  ElosEbiLINE, freshwater shrimp food and a special set for aquarium maintenance. We do not know if it will be distributed worldwide, as it comes from Japan, but Dr. Nicola Gandini told us that if there is a request by aquarists and retailers we will have them on the shelves in whichever country made the request. 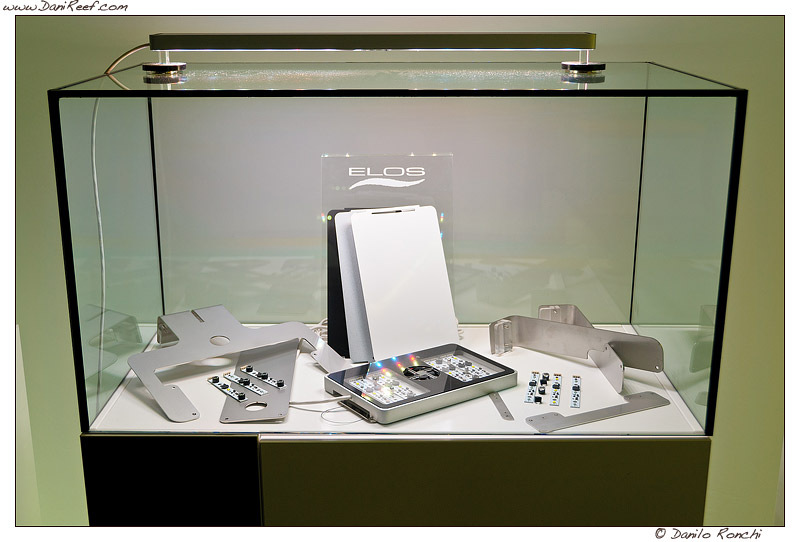 And here within another Concept80 we see the presentation of new and beautiful Elite3S, completely customizable with the ability to add up to 24 LED’s and to choose between the various colors (white, green, red, blue and royal blue) with 12 Cree XP-e white included (read more: Elos is breaking the rules with the incredible new E-Lite3). On display there are additional LED modules and all possibility of anchoring between them and with the tank, and a first look for aquarium market: Customizing the cover of the Elite3 in order to integrate better with the chosen cabinet and also with the decor of the house; this has remarkable finesse and I can bet that soon all companies will present similar solutions. 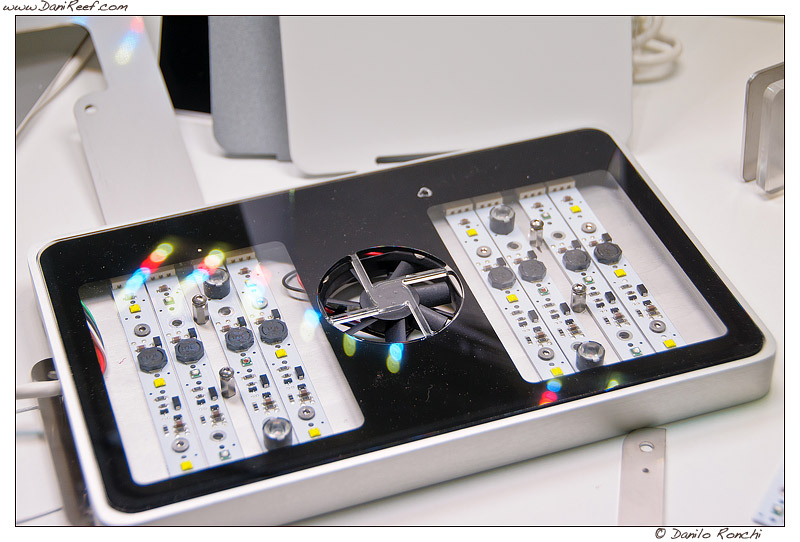 A view from below, and looking more closely, you can admire the remarkable build quality combined with a simple design that leaves us the possibility of a complete customization even if we are not industry pros.

Elite3S prices have been announced and are in line with what has always presented by the Italian manufacturer. The single Elite3S with 12 Cree XP-e white LEDs will cost 395 euro + VAT, with each additional modules will range from 43 to 56 euro each to get an additional 3 LEDs. 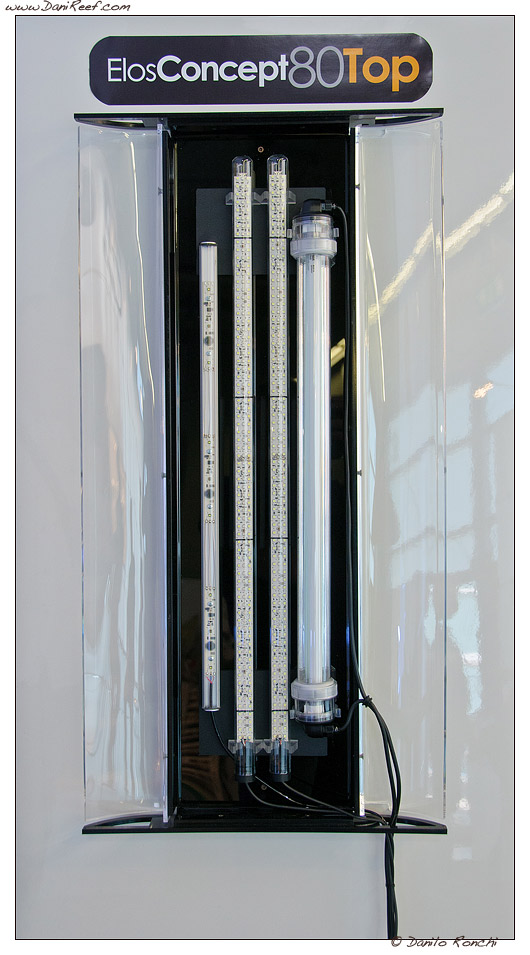 Soon after the Elite3S we arrived at new customization of Aquatop2 we’ve seen on most of the tanks at the fair. Here we can see the system from below, and we can see how you can equip it with E-stripes of different length or T5 tubes to get the perfect combination of lights. 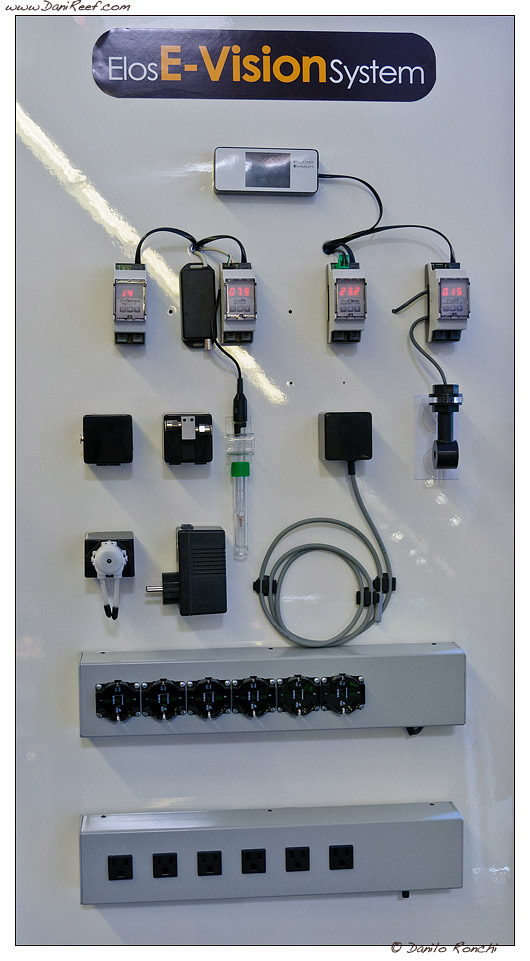 Another novelty was the long awaited expansion of the new programmable computer Evision, that surprised me in a good way. Finally you have the power units, at an affordable price of 157 euros + VAT, although the difference with the power unit of Biotopus is the presence of plastic instead of metal as the outer case.

Then they presented the new redox, pH and conductivity interfaces, but the most interesting are the new modules that allow, for example, 24v modules, like having a 24V solenoid connected directly to Control Center without having to connect to the power. Outstanding comfort, improved safety and fewer wires running under the aquarium. 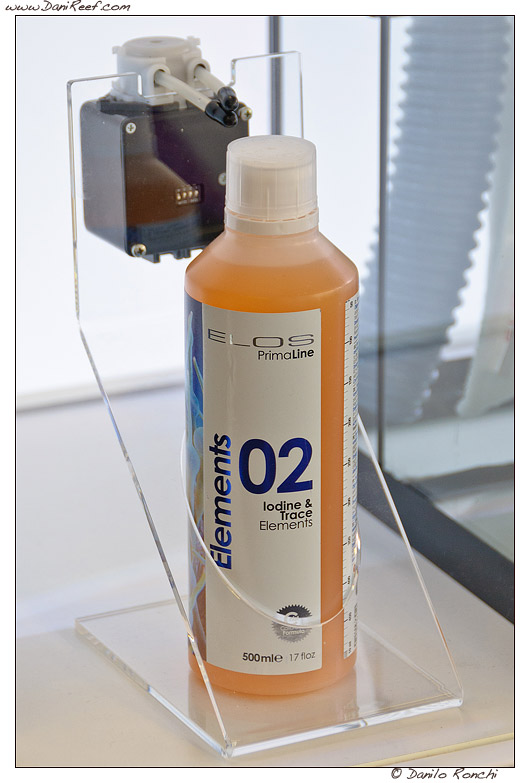 In addition to the solenoid valve are the low voltage dosing pumps, along with the new supplement Elements: Iodine and Trace just presented and reformulated.

Finally, we can say that the system has become very mature and complete, ready to use in aquarium for all common automation tasks, because the only module that is lacking is the so-called web-gate, incorporating therein at least one TCP-IP port and a text message sender, but we have seen it at work at the show. 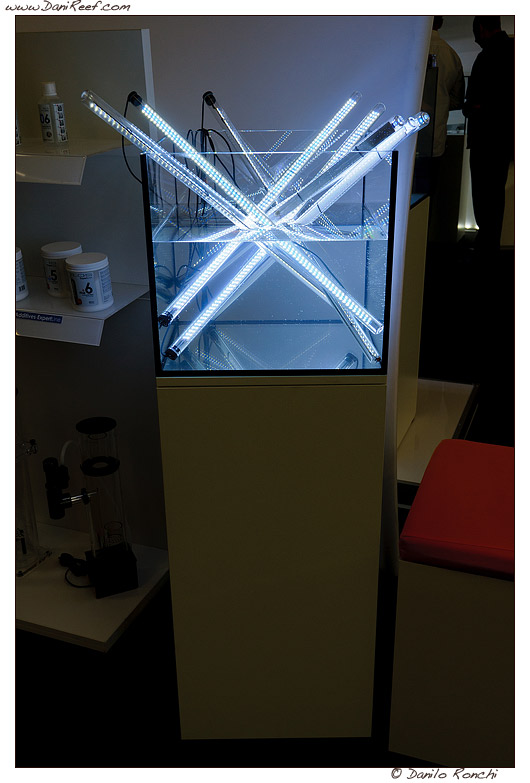 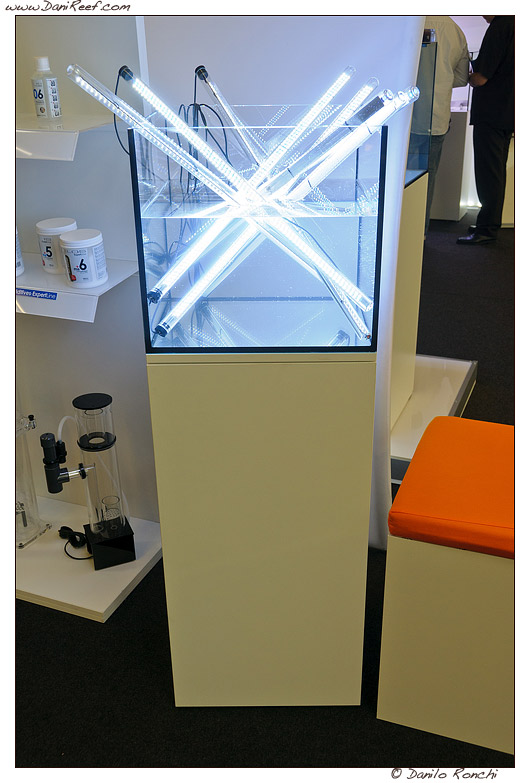 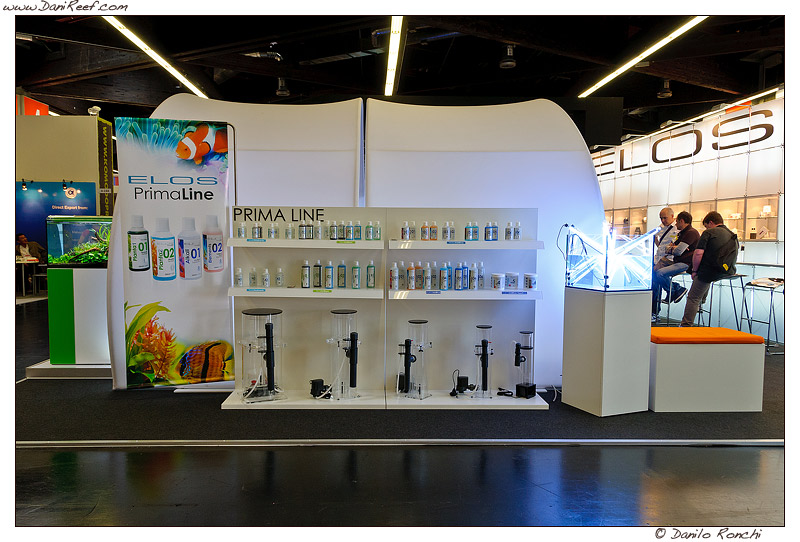 On one side of the stand it was possible to see the new line of supplements, and a new marine skimmer with needle wheel which was introduced during Interzoo 2010 but this year they finally replaced the old counter-current skimmers. They also presented the new PS200 although in truth it will be some time before it is shipped with the new midi system. 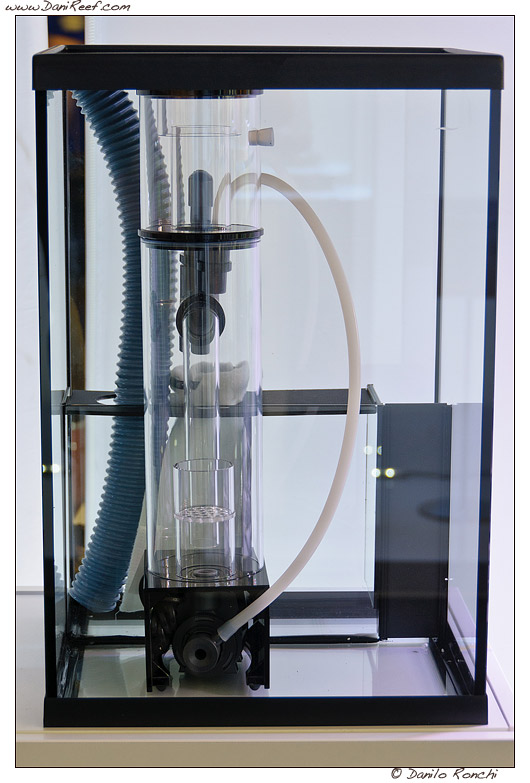 Here is the new skimmer PS200 in the new sump, as you can see is extremely compact because the pump is placed under the body of the skimmer. 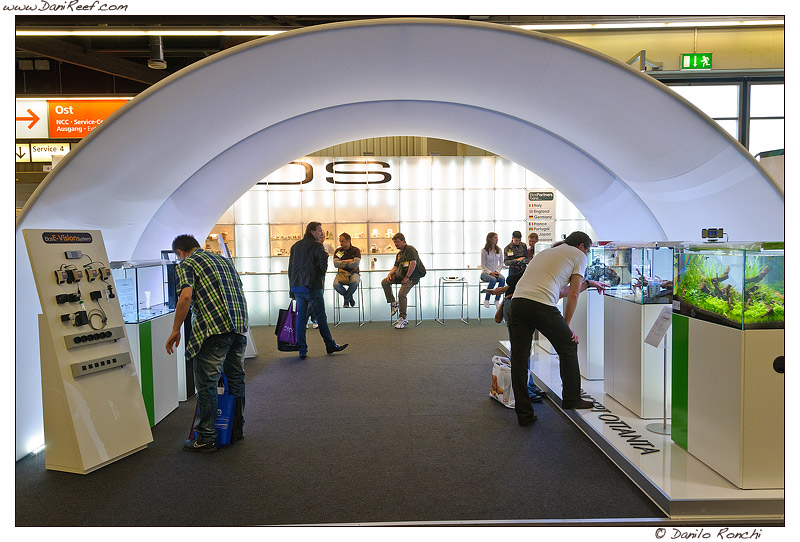 Following three photos of a new and beautiful Aquatop2 over Concept80 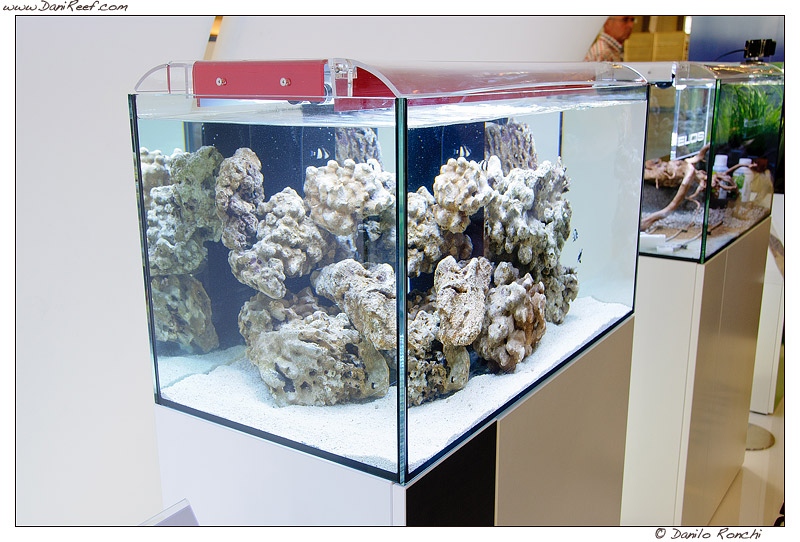 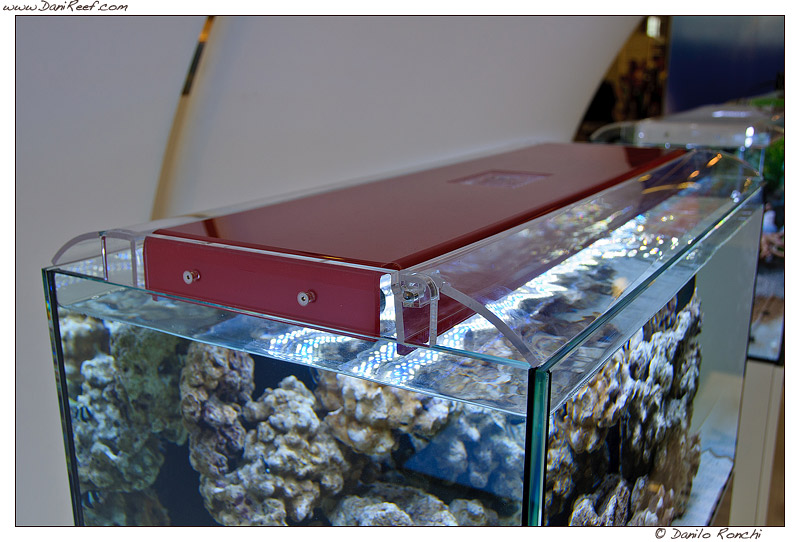 Particular of the acrylic wings 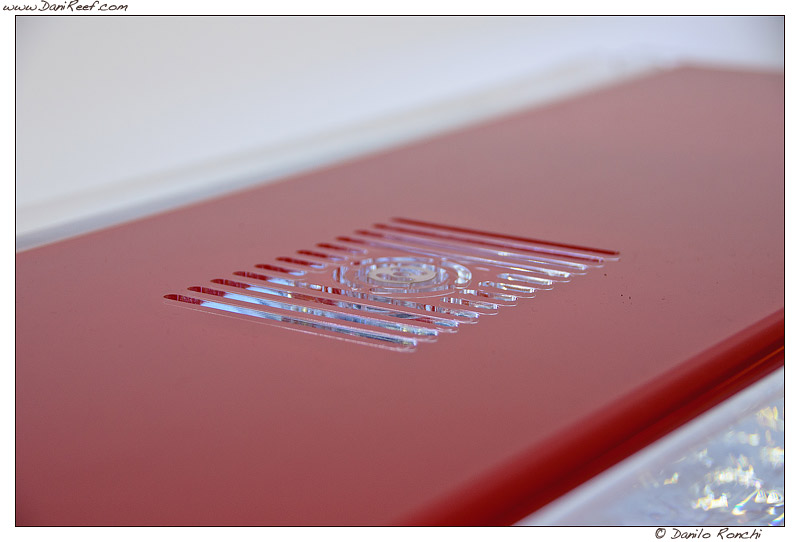 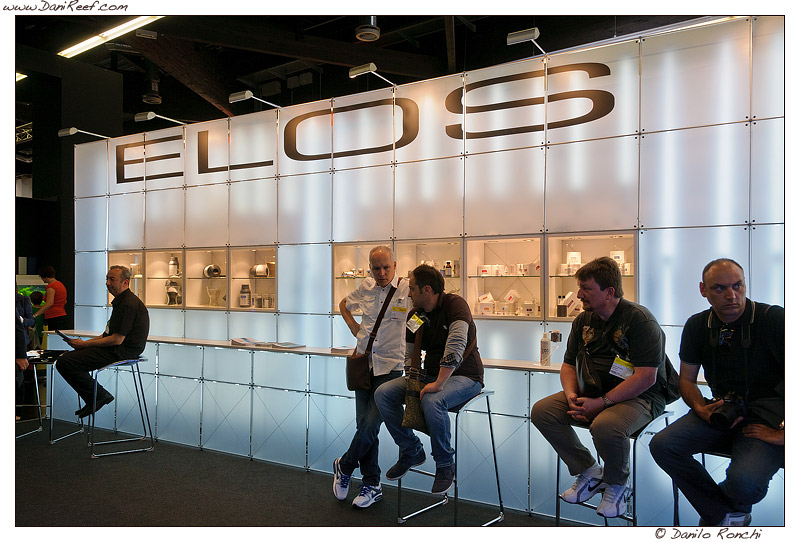 Detail of the beautiful wall containing Elos products which aslo serves as a support to the weary traveling companions, from right: Lumaz, White Fang, AndreaNegu and Gianluca. 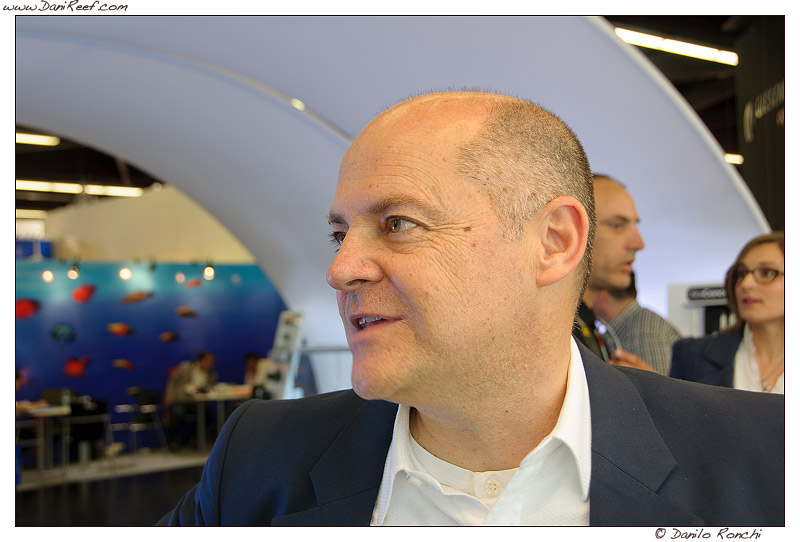 A final close-up of Nicola Gandini owner and deus ex machina of Elos brand before you finish off with a video summary created in collaboration with Mirko Agasi of AquaNature.