Insane in the Chromatophores

http://www.facebook.com/BackyardBrains During experiments on the axons of the Woods Hole squid (loligo pealei), we tested our cockroach leg stimulus protocol (an iPod) on the squid’s chromatophores. The results were both interesting and beautiful.

The folks at Backyard Brains, known for their Spikerbox that can help you record and see neural activity, and researchers at at the Marine Biological Laboratory in Woods Hole, MA have applied the Backyard Brains protocol stimulating an amputated cockroach leg into motion via music to the chromatophores of squid skin, with very cool results. Squids, and other cephalopods, neurally control the pigmented cells in their skin, chromatophores, to reflect light. The squid skin in use belongs to the Longfin Inshore Squid, loligo pealei, and has three different chromatophore  colors – brown, red and yellow – with each chromatophore surrounded by muscles that can contract to reveal the pigment underneath. According to Backyard Brains, “We used a suction electrode to attach to the squid’s fin nerve, then connected the electrode to an iPod nano as our stimulator. The results were both interesting and beautiful. The video is a view through an 8x microscope zoomed in on the dorsal side of the fin”. 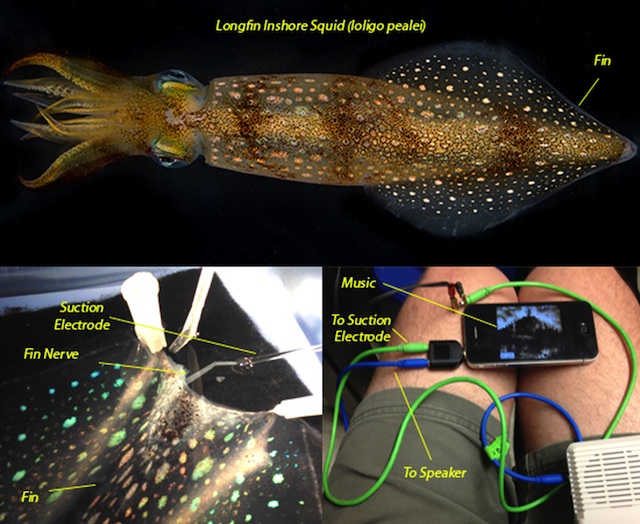 If you didn’t think cephalopods were cool before, this alone should change your mind. Perhaps in the future, dance clubs will be wall papered with artificially grown squid skin, or perhaps your television will be made of a squid skin analogue. I know, we still want our jet packs, but perhaps the squid can help us there too.