Closing in on Captive Angels

It’s been an eventful year for the advancement of aquaculture, particularly for angelfishes. For the first time since the 1970s we’ve seen Pomacanthid angelfishes reared in intensive culture conditions. My colleagues at the Florida Aquaculture Laboratory, in partnership with Rising Tide Conservation have managed to raise Pomacanthus semicircularis from eggs obtained from a display tank at the Columbus Zoo, on some combination of wild plankton, while the folks at Bali Aquarich have been tantalizing us with videos of juvenile captive-bred angels destined for the trade, raised on….I’m not sure what, but raised in tanks!   Meanwhile, here in New York, I’ve been passing the time waiting for the Liopropoma spawning season to start up again by collecting pelagic eggs from the coral reef tank at the Long Island Aquarium. Although I still don’t have fully settled angelfish to show for my efforts, I have managed to get several larvae to around one month of age on several occasions, using only cultured copepods from Algagen for food.  I don’t yet know what species I’ve almost raised, but I’ve sent some late-stage larvae out for DNA analysis in order to satisfy my curiosity.  Sadly though, at the rate the lab is moving, I may very well end up getting some through metamorphosis before the results come back (Okay, maybe that wouldn’t be so sad after all). 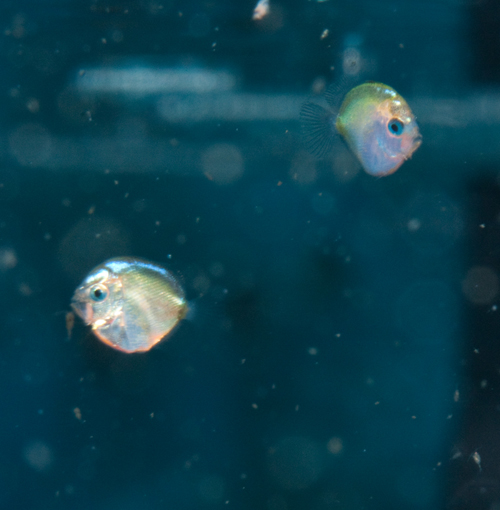 As I repeatedly lose the last of my larvae just before settlement, it is very tempting to try feeding wild plankton to the next batch, just to get some through, however there are so many other factors I would like to rule out first. Like the fact that the only two suitable rearing tanks that we have space for are on a system that is incapable of producing a water-turnover rate sufficient to maintain ideal water quality in the tanks, and that they are in a room with no temperature control and prone to fluctuations of ten or more degrees in a 24-hour period, and that they are in the path of our almost daily behind-the-scenes tours and subject to mobs of hyperactive junior-high-school students who, for some reason, love to slap large polyethylene tanks as they walk past them (believe it or not, larvae don’t like that).  If I sound bitter, it’s just the crankiness that sets in when I haven’t raised a new species for a while.   I hope to have more good news soon though.  Erik Stenn of Algagen reports that he has some new copepod species in production that I am eager to get my hands on.  Perhaps the right food will help these larvae to overcome some of the other stresses they are facing.

In the meantime, check out some of what’s almost been raised. 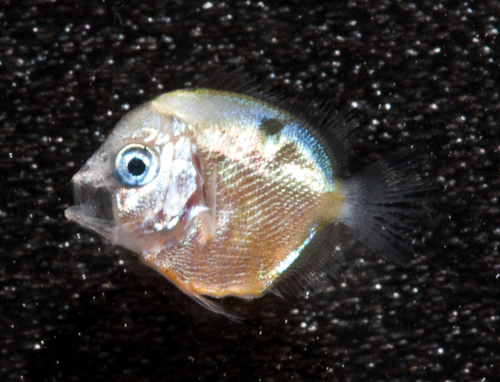