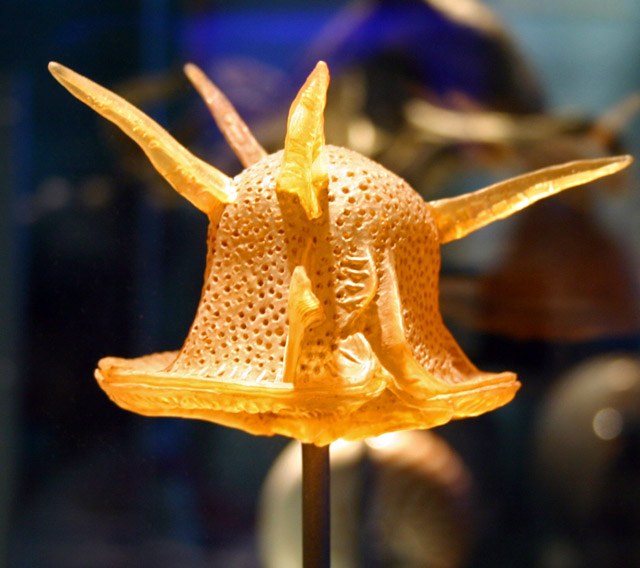 Smithsonian model of a dinoflagellate. Not exactly beautiful … except maybe for patients recovering from a stroke. Photo by Ryan Somma

“Our research suggests that compounds like brevetoxin-2 can augment neuronal plasticity potentially providing a neural repair therapy for stroke recovery. If that outcome can be supported by further studies in animals and subsequently humans, it could have a profound impact on a currently non-treatable condition,” said Thomas F. Murray, Ph.D. associate vice president for Health Science Research and professor and chair of the Department of Pharmacology, Creighton School of Medicine.

The research team from Creighton University School of Medicine, University of North Carolina Wilmington, and Scripps Institution of Oceanography published their findings in the Nov. 12 online edition of the journal Proceedings of the National Academy of Sciences (PNAS).

The tiny marine dinoflagellate Karenia brevis produces brevetoxin, which in high concentrations is responsible for the harmful algal blooms known as red tides that occur in the waters off the west coast of Florida. The neurotoxin-laden red tide causes respiratory irritation in humans and central nervous system paralysis in fish.

“Brevetoxin is a neurotoxin that is known to activate nerves cells to fire spontaneously,” said Dan Baden, Ph.D. He is director of the Center for Marine Science as well as a founding member and Executive Principal of MARBIONC at University of North Carolina Wilmington. “It’s a great advancement to show that this naturally occurring ocean compound can stimulate nerve cell growth in cultured mouse cells.”

Brevetoxin is one of more than 1,000 ocean organisms cultured at the University of North Carolina Wilmington’s MARBIONC facility (Marine Biotechnology in North Carolina) for use in bio-medical research. The bioactive materials from Karenia brevis have been actively studied by Baden since the early 1970s. A clot that restricts blood flow to an area of the brain causes a stroke. Although the dead tissue cannot be revived, the brain can be trained to redirect nerve impulses to living nerve cells nearby.

Recent scientific studies have shown that rewiring of nerve cells following a stroke occurs as a result of heightened plasticity around the brain’s damaged cerebral cortex, which is the area of the brain responsible for sensory and cognitive nervous system functions.

This new study showed enhanced neuronal sprouting, the growth of axons or dendrites of a nerve cell as well the formation of new synapses between nerve cells in mouse neurons in a culture dish.