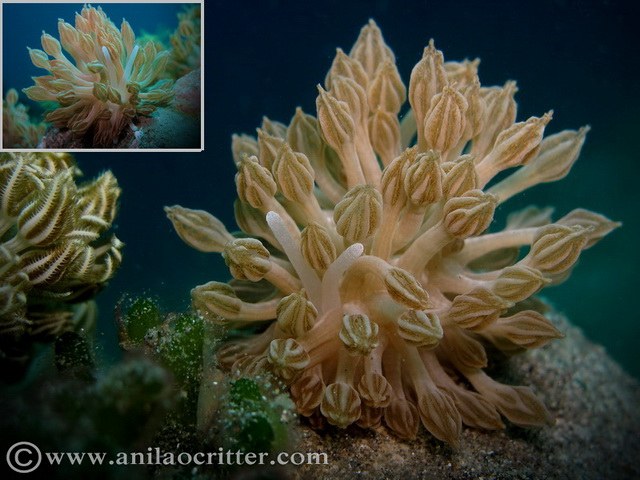 Is it Xenia or is it a mimic?

Named after malacologist William B. Rudman, this nudibranch is incredibly hard to tell the difference when comparing it to its prey: Xenia spp. corals.  From the top, the only real way is to tell by looking for two white protruding rhinophores, or sensory tentacles that grow out the front of this nudibranch. This nudibranch is really quite amazing as its certa, or outgrowths on its back, look much like pulsing Xenia polyps.

One interesting fact is this nudibranch actually contains Symbiodinium spp. zooxanthellae, meaning that it is at least partially photosynthetic relying on its zooxanthellae for at least some of its energy requirements.

Normally this nudibranch is found nestled in a hollow in a Xenia colony  but they are occasionally seen crawling around on the reef.

Currently it is only found in North Sulawesi, Indonesia and Luzon, the Philippines.

Blennywatcher.com shot some great video of this nudibranch in the wild: