Singapore is now home to the world’s largest aquarium 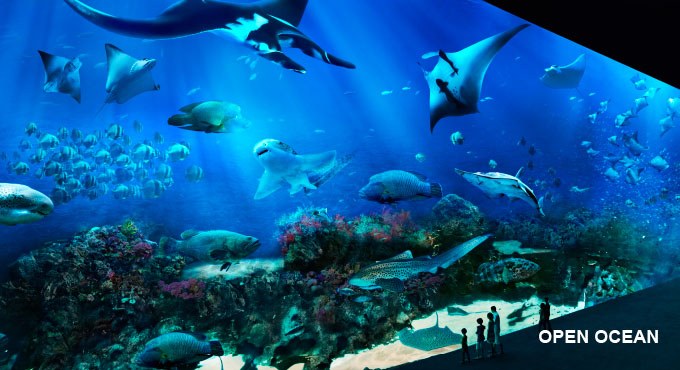 The Open Ocean viewing panel is wider than a professional basketball court and three stories tall!


It was only earlier this summer that South Korea opened Asia’s largest aquarium: Aqua Planet Jeju.  Now a new public aquarium has not only taken the title of Asia’s largest aquarium but also the world’s largest aquarium.  S.E.A. Aquarium at Resorts World Sentosa showcases over 11 million gallons of water, easily besting the previous record of 8.5 million gallons held for almost a decade by Georgia Aquarium.  S.E.A Aquarium also boosts the world’s largest continuous viewing panel of, get this, 118 feet wide by 27 feet tall! The previous record was held by Aqua Planent Jeju (75 x 28 ft).

S.E.A. Aquarium will showcase an impressive number of habitats including the Red Sea, South China Sea, Straight of Karimata (Java Sea), Straight of Malacca (Andaman Sea), Arabian Sea, East Africa (freshwater/cichlids), a shark exhibit, and of course the record-breakingly large open ocean exhibit. All these exhibits house an astounding 30,000 marine animals.  By 2013, this number will climb to over 100,000 specimens spanning approximately 800 different species!

The aquarium’s opening is not without controversy;  The “Ocean Journey” exhibit will house a pod of bottlenose dolphins, which has upset several animal rights groups.

With so many “mega” aquariums opening and the major renovations of “heritage” aquariums, people across the world have never had a greater opportunity to explore our oceans and gain new appreciation for the majesty and mystery of sea life.