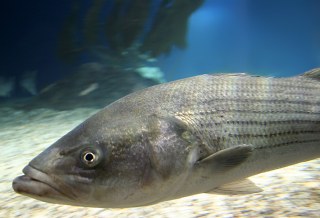 Photo by Maritime Aquarium at Norfolk

Authorities matched the distinctive scars on the bass to confirm that the winning fish was the same fish that was reported missing earlier the same day.  The bass also exhibited no hook damage, which raised eyebrows at the fishing competition.

Earlier this year, Clark pled guilty to false representation.  Last week, he admitted to the piscine theft and is now awaiting sentencing.