Blenny or Bream: Who can tell? 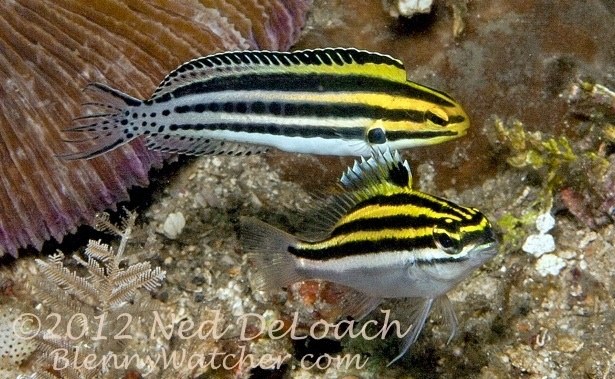 These two different families of fish look similar in the photo, but it’s the video that really showcases mimicry at work.


During one of his innumerable dives, Ned DeLoach tracked a juvenile bream (Scolopsis bilineatus) to see if it would lead him to a fangblenny (Meiacanthus grammistes), a species this bream is known to mimic.  Sure enough, the bream connected with a fangblenny, and Ned captured footage of the two side-by-side.  The video helps you appreciate how effective mimicry really is — much more so than photos alone could.

The bream not only looks like the fangblenny, but it also behaves like one.  This type of mimicry is called Batesian mimicry where a harmless species (the baby bream) imitates a harmful species (the fangblenny, which is venomous) to fool predators.This isn’t the first Batesian mimicry footage recorded by Ned DeLoach.  We previously shared another video of a baby sole fish imitating a (get this!) flatworm and a nudibranch imitating a xenia, pulsation and all!   Make sure to also watch these videos to witness just how amazing mimicry in action can truly be.

Nemo Found in the Depths of the Caribbean