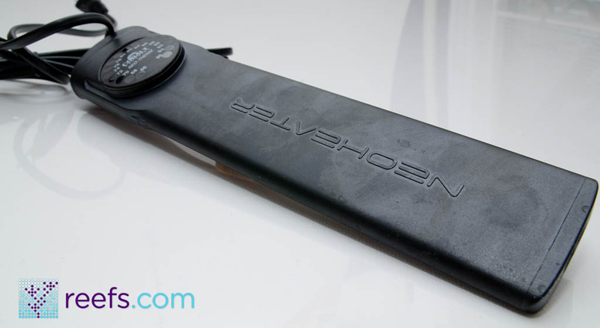 When it comes to fish tank equipment, countless amount of innovations have been implemented in recent years as technology changed and our understanding in keeping marine animals improved. There is however, a group of aquarium devices that hasn’t changed so much in terms of build and functionality. Belonging to such category are aquarium heaters- sure, we’ve seen some improvements in the thermostat designs, build quality and user-friendliness, but at the end of the day most heaters look and perform alike and it comes down to individual models reliability and effectiveness that really matters. After all, the last thing aquarist need is a heater that either fails to keep set temperature or, worst, overheat tank’s water and kill all inhabitants. 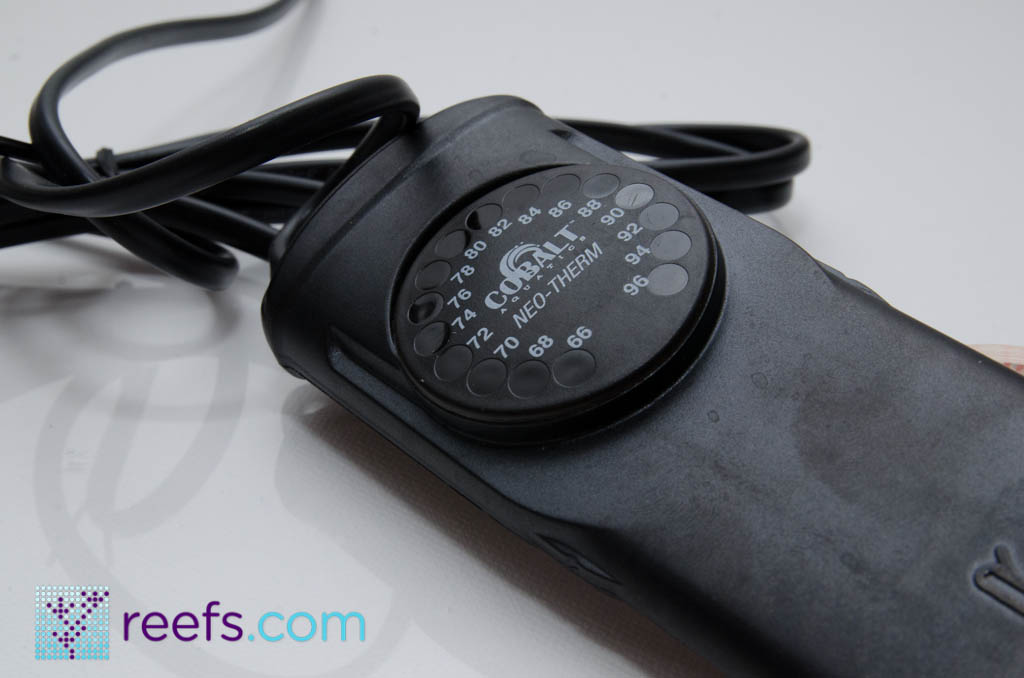 Given the situation, aquarium heaters manufacturers cope with a hard task of attracting potential customers to their product(s). Neo-Therm heater is a new device from Cobalt Aquatics that tries to build a base of followers within aquatic community. Is it up to the challenge? We’ll find out in the remaining part of this review, so read on…

Reviewing aquarium heaters is a challenge by itself, because longtime reliability cannot be determined on a product that entered the market only recently. Cobalt Aquatics, however, offers an interesting design backed up by advanced electronics and it sure is a fresh breath into aquarium heaters scene. Let’s start from the beginning by poking inside the box… 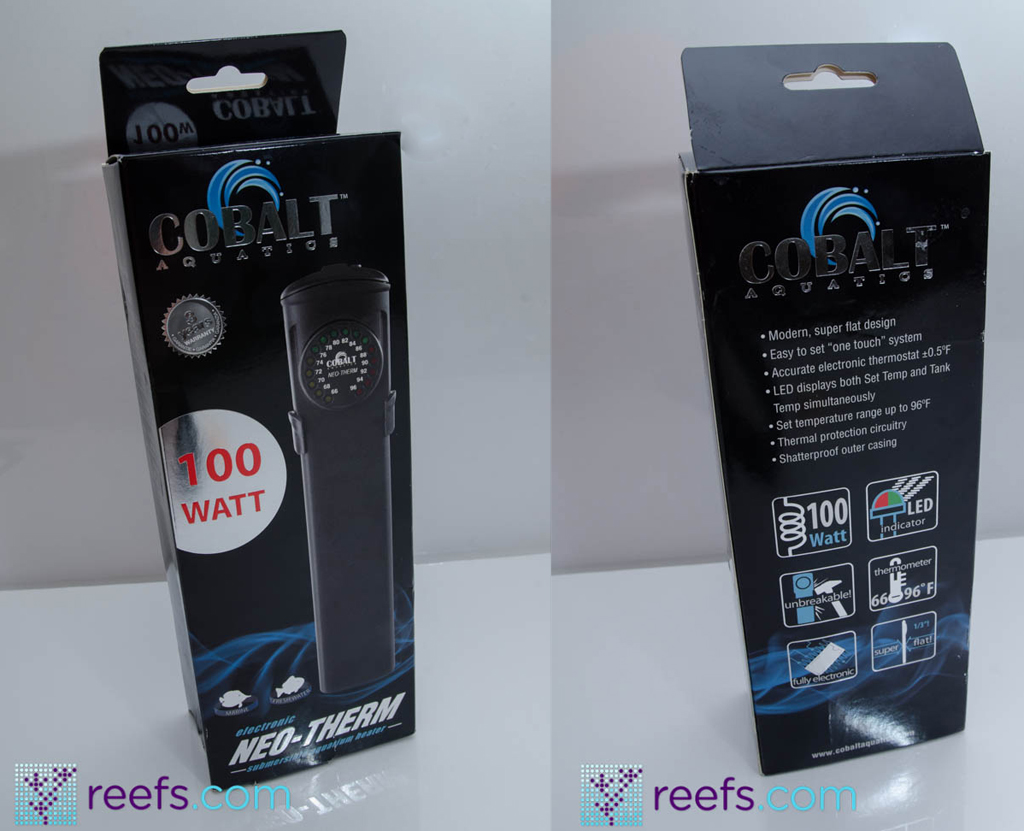 Cobalt Aquatics Neo-Therm heater comes in an attractive, shiny packaging from which we can learn some basic facts about the product inside, like it’s temperature range (66-96F), the “unbreakable” design and fully electronic thermostat. One particular piece of information, printed in bold letters on the side of the box, caught my attention- the heater is made in Poland, as opposed to majority of aquarium equipment that are mass produced in Asian countries. 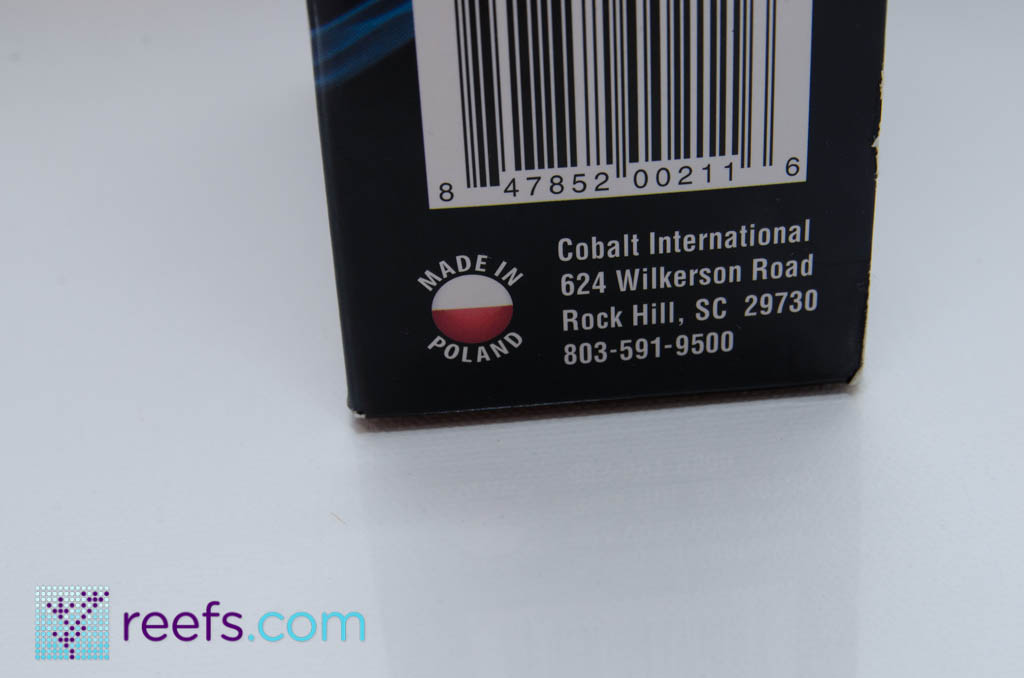 Europeans are known for their quality control and attention to details and it’s especially important when it comes to a piece of aquatic equipment that is expected never to fail during it’s lifespan. So far, so good.

Inside the box there are the heater itself, a mounting bracket with two suction cups and printed instruction. 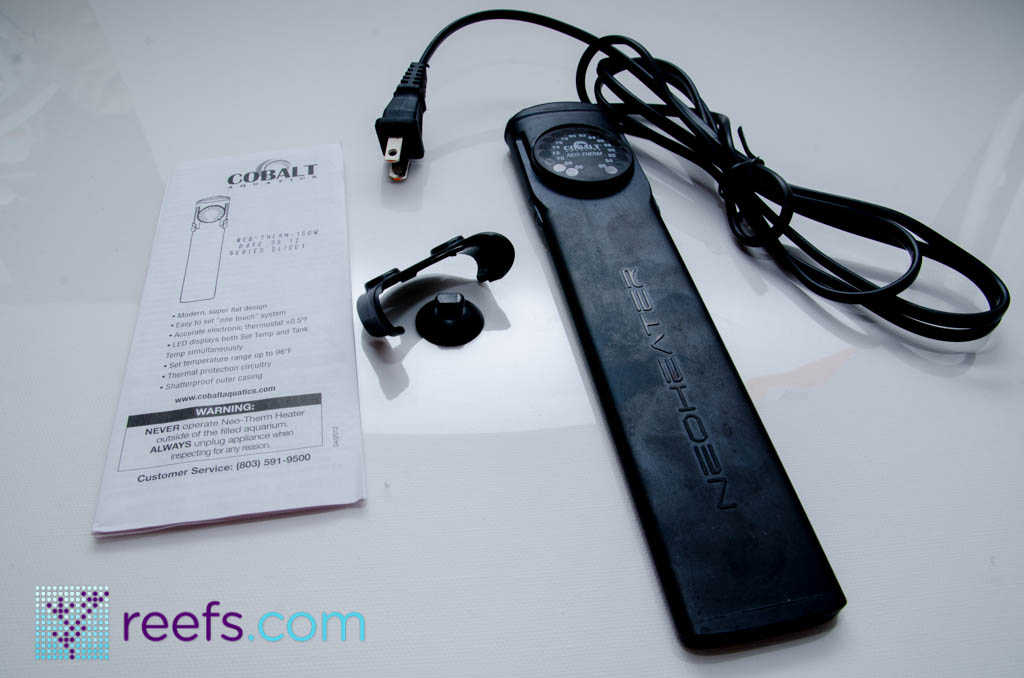 It’s no doubt the design of Neo-Therm heater is one major characteristic that differs it from other heaters on the market and may be it’s strongest selling point (more on that later). Instead of long, cigar-like shape we are all used to, Neo-therm is wide and flat. 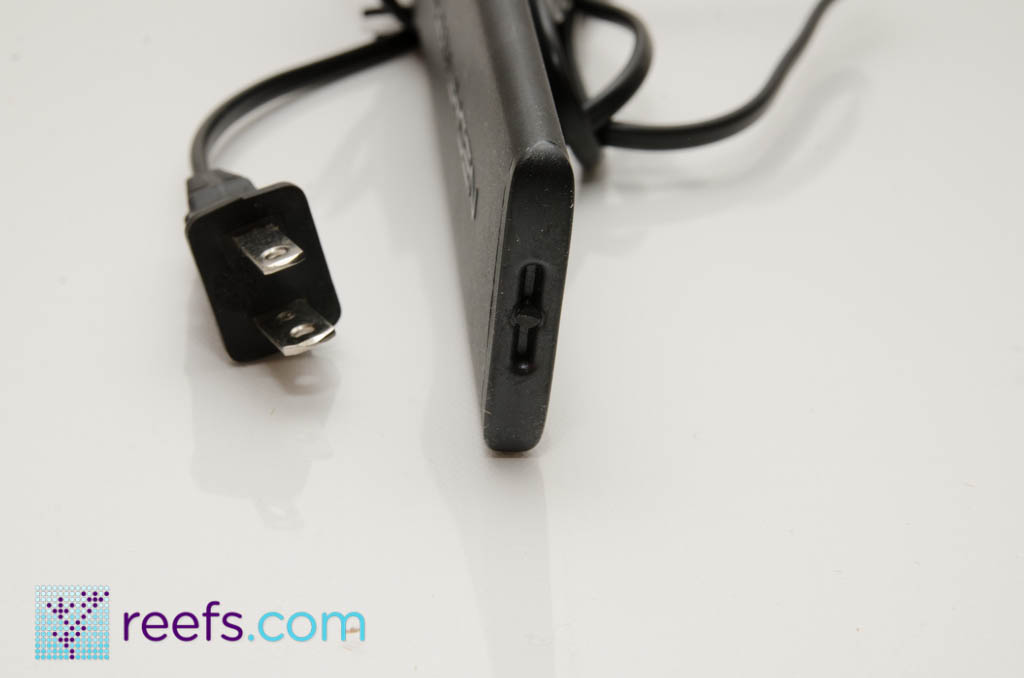 This build design has two significant advantages- it can fit in tight places, like chambers of an all-in-one aquariums with false back and it offers more surface contact area, which translates to better heat dispersion (at least in theory). The rest of this heater’s look is equally unorthodox-setting desired temperature is done by means of a single button on top of the device and the display consist of LED lights with temperature values arranged in a circular fashion. We’ll talk about how this thing operates later, meanwhile let’s take some measurements…

For the purpose of this review, I received a 100W, 120V model targeted for US market (hence the Fahrenheit temperature units). Neo-therm heaters come in several models with different wattage, from 25W model up to 100W. 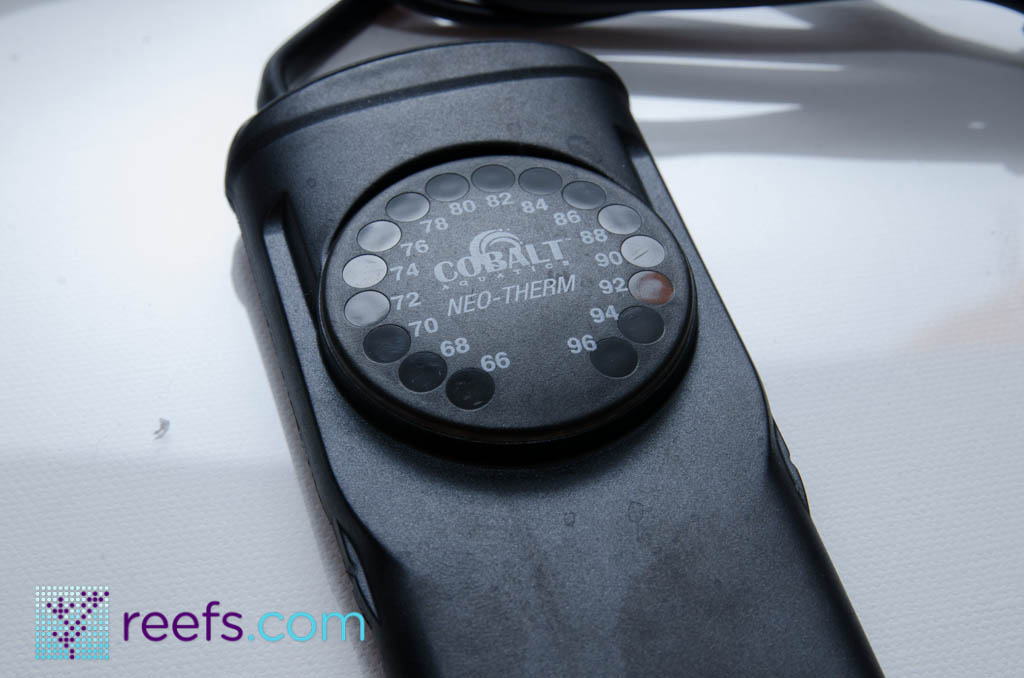 The heating element is encapsulated in a hard plastic case, making it shatterproof. Black matte finish helps blend heater into the background in case there’s no room to hide it elsewhere. Overall, built quality meets expected standards for such a device. 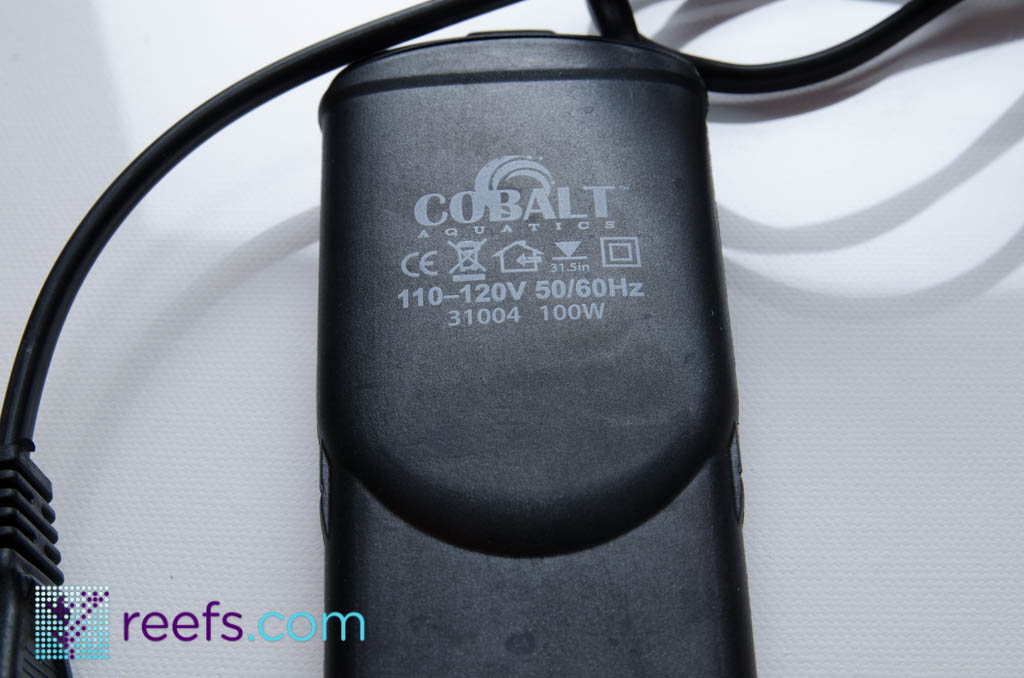 Neo-therm heeater is quite straight-forward when it comes to setting it up. The included bracket attaches to tank’s wall by means of two suction cups. Few seconds after plugging the heater into power source, the LEDs circle the dial and stop, displaying two indicators- a steady, green one showing set temperature and a blinking one informing user about current tank’s temperature. Fast blinking light means actual temperature is higher than the set value, while slow blinking indicates that the temperature is below target value. When temperature reaches desired value, Neo-Therm will display only one, steady LED. Changing temperature settings is very easy, just press the button on top of the heater and stop when LED indicator shows target value. 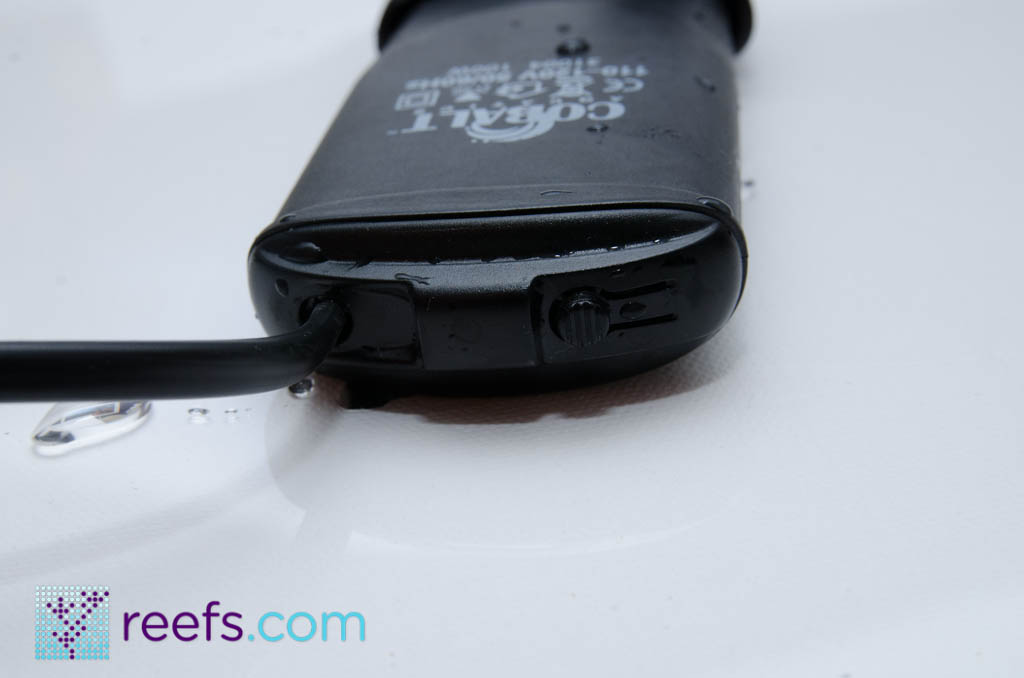 Two tests has been performed, a power draw test and accuracy level test. The results are as follows:

a) power draw- I checked wattage of the unit using Kill-A-Watt device and it showed me the advertised value, displaying 101W 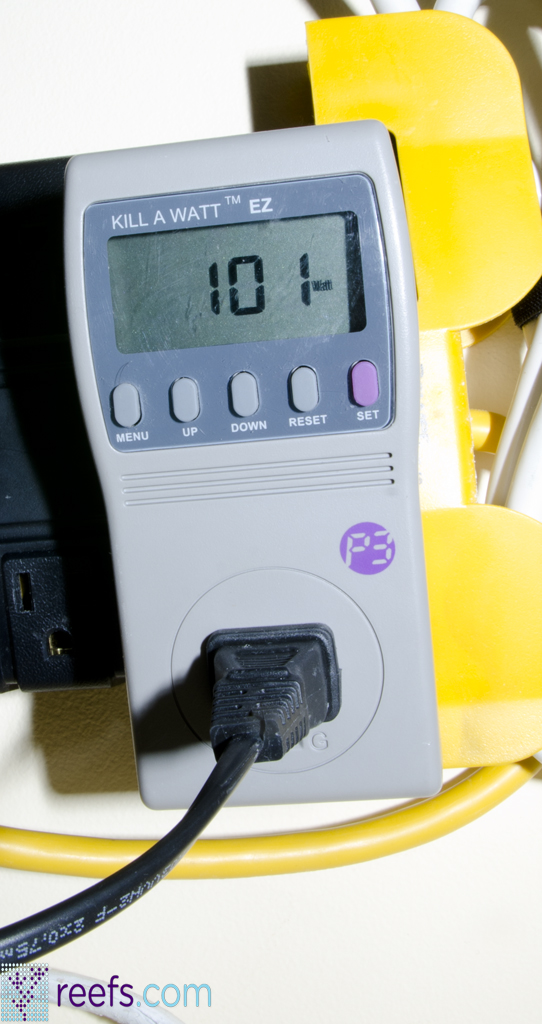 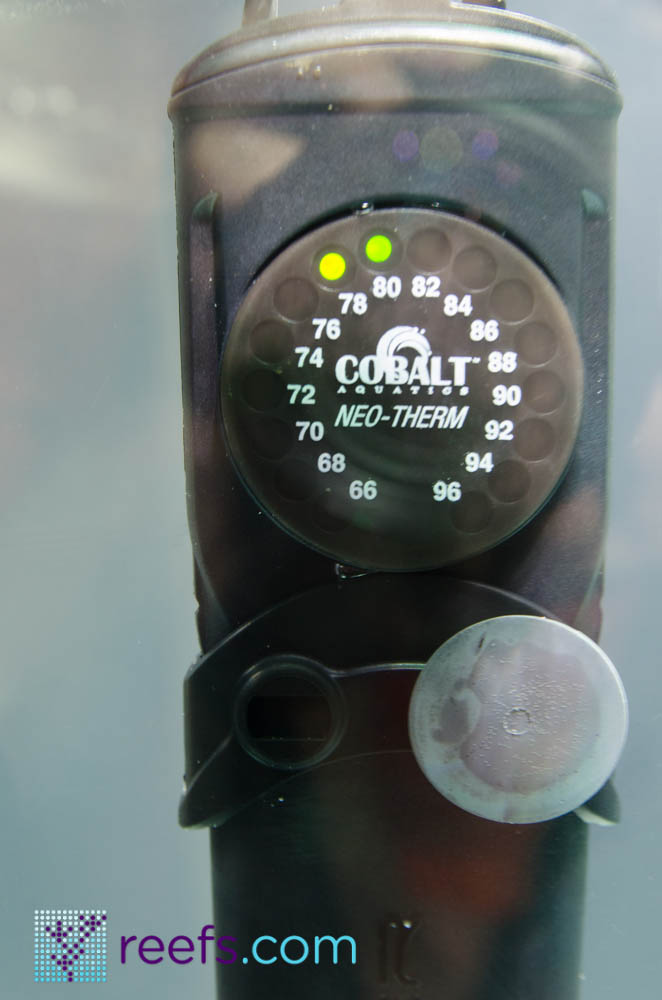 Aquarium heaters major selling point is how reliable they are. Since it only entered the market recently, Cobalt Aquatics Neo-therm heater long time reliability is unknown for the US consumer. However, the Polish company that manufacture Neo-Therm for Cobalt Aquatics has been on European markets for 20 years and is a respected brand amongst reefers. On the other hand, N-T creates a small revolution with it’s interesting design and user-friendliness (or fool-proofing, if you prefer) The flat-thin shape of the unit allows for better heat dispersion and fit in tight spaces. Single-button operation is as straight-forward as it can be, while display dial is easy to figure out and read. I only wish it could be set in ±1°F increments, especially given it’s advertised 0.5 °F accuracy. Also, we would like to see higher wattage models for larger systems.

Summarizing, I would not hesitate to recommend Cobalt Aquatics Neo-Therm to anyone looking for a low profile heater that is both easy to blend into it’s surroundings and offers hassle-free setup while performing as an aquarium heating device should. Retail pricing of Neo-therm ranges from $55-$65 To learn more about the new heater line and other products from Cobalt Aquatics, visit their website at: http://www.cobaltaquatics.com/