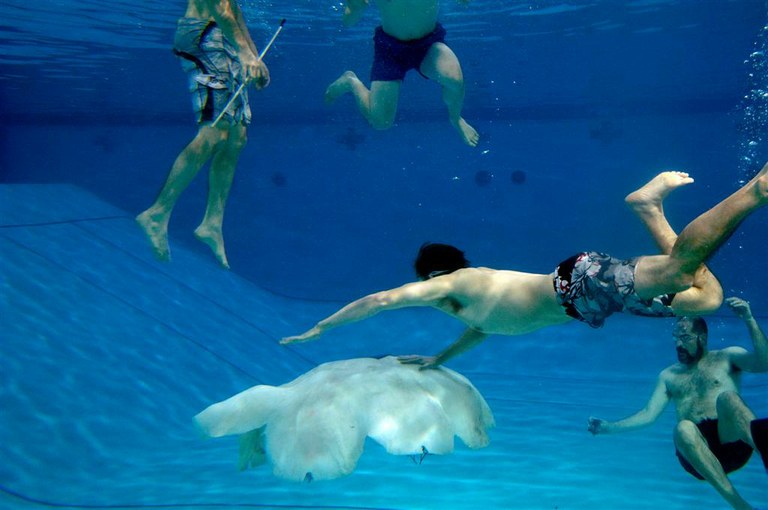 
The prototype robot, nicknamed Cyro, is a larger model of a robotic jellyfish the same team – headed by Shashank Priya of Blacksburg, Va., and professor of mechanical engineering at Virginia Tech – unveiled in 2012. The earlier robot, dubbed RoboJelly, is roughly the size of a man’s hand, and typical of jellyfish found along beaches.

“A larger vehicle will allow for more payload, longer duration and longer range of operation,” said Alex Villanueva of St-Jacques, New-Brunswick, Canada, and a doctoral student in mechanical engineering working under Priya. “Biological and engineering results show that larger vehicles have a lower cost of transport, which is a metric used to determine how much energy is spent for traveling.”

Both robots are part of a multi-university, nationwide $5 million project funded by U.S. Naval Undersea Warfare Center and the Office of Naval Research. The goal is to place self-powering, autonomous machines in waters for the purposes of surveillance and monitoring the environment, in addition to other uses such as studying aquatic life, mapping ocean floors, and monitoring ocean currents.

Jellyfish are attractive candidates to mimic because of their ability to consume little energy owing to a lower metabolic rate than other marine species. Additionally, they appear in wide variety of sizes, shapes and colors, allowing for several designs. They also inhabit every major oceanic area of the world and are capable of withstanding a wide range of temperatures in both fresh and salt waters. Most species are found in shallow coastal waters, but some have been found in depths 7,000 meters below sea level.

Partner universities in the project are Providence College in Rhode Island, the University of California Los Angeles, the University of Texas at Dallas, and Stanford University. Priya’s team is building the jellyfish body models, integrating fluid mechanics and developing control systems.

Cyro is modeled and named after the jellyfish cyanea capillata, Latin for Llion’s Manemain jellyfishJellyfish, with “Cyro” derived from “cyanea” and “robot.” As with its predecessor, this robot is in the prototype stage, years away from use in waters. A new prototype model already is under construction at Virginia Tech’s Durham Hall, where Priya’s Center for Energy Harvesting Materials and Systems is based.

“We hope to improve on this robot and reduce power consumption and improve swimming performance as well as better mimic the morphology of the natural jellyfish,” Villanueva said, adding that the project also allows researchers such as himself to better understand aquatic creatures live. “Our hopes for Cyro’s future is that it will help understand how the propulsion mechanism of such animal scales with size.”

A stark difference exists between the larger and smaller robots. Cyro is powered by a rechargeable nickel metal hydride battery, whereas the smaller models were tethered, Priya said. Experiments have also been conducted on powering jellyfish with hydrogen but there is still much research to be done in that area.

In both cases, the jellyfish must operate on their own for months or longer at a time as engineers likely won’t be able to capture and repair the robots, or replace power sources.
“Cyro showed its ability to swim autonomously while maintaining a similar physical appearance and kinematics as the natural species,” Priya said, adding that the robot is simultaneously able to collect, store, analyze, and communicate sensory data. This autonomous operation in shallow water conditions is already a big step towards demonstrating the use of these creatures.”

How does the robot swim? Its body consists of a rigid support structure with direct current electric motors which control the mechanical arms that are used in conjunction with an artificial mesoglea, or jelly-based pulp of the fish’s body, creating hydrodynamic movement.

With no central nervous system, jellyfish instead use a diffused nerve net to control movement and can complete complex functions. A parallel study on a bio-inspired control system is in progress which will eventually replace the current simplified controller.
As with the smaller models, Cyro’s skin is comprised of a thick layer of silicone, squishy in one’s hand. It mimics the sleek jellyfish skin and is placed over a bowl-shaped device containing the electronic guts of the robot. When moving, the skin floats and moves with the robot, looking weirdly alive.

“It has been a great experience to finally realize the biomimetic and bio-inspired robotic vehicles,” Priya said. “Nature has too many secrets and we were able to find some of them but many still remain. We hope to find a mechanism to continue on this journey and resolve the remaining puzzles.”

Virginia Tech College of Engineering researchers have unveiled a life-like, autonomous robotic jellyfish the size and weight of a grown man, 5 foot 7 inches in length and weighing 170 pounds, as part of a U.S. Navy-funded project.

The prototype robot, nicknamed Cyro, is a larger model of a robotic jellyfish the same team – headed by Shashank Priya of Blacksburg, Va., and professor of mechanical engineering at Virginia Tech – unveiled in 2012. The earlier robot, dubbed RoboJelly, is roughly the size of a man’s hand, and typical of jellyfish found along beaches.