Research Suggests that Three is a Crowd Among Cleaner Shrimp 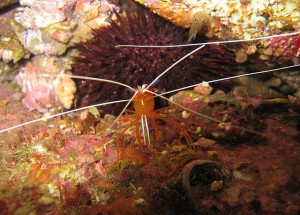 As far as aquarists may be concerned, the skunk shrimp or cleaner shrimp (Lysmata amboinensis) is the quintessential “reef safe” crustacean; it not only exhibits minimal interspecific aggression, but it also “cleans” (hence, one of its common names) by feeding on the external parasites and dead skin tissue of receptive fishes. However, the findings of a recent study published in BioMed Central’s Frontiers in Zoology stand as a warning to those who wish to keep multiple individuals of this seemingly benign creature in the same aquarium.
Being protandric simultaneous hermaphrodites, all cleaner shrimp begin life as males. Then, as they mature, they can in many cases develop female sex organs. While those individuals bearing the reproductive anatomy of both sexes are almost always capable of breeding as males, individuals can breed as females only within a few hours of molting.
Cleaner shrimp commonly occur as monogamous pairs in the wild. Of all shrimp, monogamy is known only among “cleaner” shrimp species. The monogamy practiced by these particular animals apparently owes to competition for food (or, rather, for space needed on good perches in “cleaning stations”). This competition can be fierce—indeed, so much so that jealous pairs will seek to kill any intraspecific that attempts to occupy their territory. Hypothetically, the fewer number of individuals there are to compete with the pair for food resources (i.e., the more food there is available for the female), the greatest number of eggs can be produced. Intruders are most vulnerable to attack shortly after molting, when their defenses are least effectual—and, as it happens, when they are at their peak reproductive capacity.
Researchers conducting this study maintained groups of two, three and four individuals. Each group was housed separately in a small aquarium. Though each shrimp was provided with its own perch and an unlimited access to food, mortalities due to intraspecific aggression had reduced the numbers in tanks containing three or four individuals to pairs within a mere six weeks—something for hobbyists (much less suppliers and retailers) to consider before holding more than a couple of these extraordinarily possessive creatures together.
More information about this study can be found at:
BioMed Central (2011, November 14). Violent passions: Jealous cleaner shrimp murder their rivals. ScienceDaily. Retrieved April 17, 2013, from http://www.sciencedaily.com¬ /releases/2011/11/111111095520.htm. Encounter with the dolphins of the Red Sea