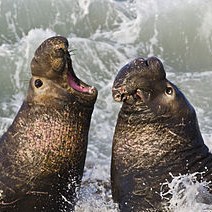 Yes, a study published this month (PLOS ONE) reports on the first H1N1 virus in marine mammals.  Scientists at the University of California, Davis, detected the H1N1 virus in free-ranging northern elephant seals off the central California coast a year after the human pandemic began.

Lead author Tracey Goldstein, an associate professor with the UC Davis One Health Institute and Wildlife Health Centre, says that they expected to find flu viruses as they have been found in marine mammals before, but not H1N1. Goldstein says that: “This shows influenza viruses can move among species.”

For this study, nasal swabs from more than 900 marine mammals off the Pacific Coast (from Alaska to California) were tested.  H1N1 infection was detected in two northern elephant seals and antibodies to the virus were found in 28 more (indicating more widespread exposure).  The two infected seals did not appear to be ill, which indicates marine mammals may be infected without showing clinical signs of illness.

“H1N1 was circulating in humans in 2009,” said Goldstein. “The seals on land in early 2010 tested negative before they went to sea, but when they returned from sea in spring 2010, they tested positive. So the question is where did it come from?”

The report said that direct contact with humans was unlikely as the elephant seals, when at sea, spend most of their time foraging in the northeast Pacific Ocean off the continental shelf.  Having been satellite tagged and tracked, the researchers knew exactly where the seals had been and when they arrived on the coast. Infections in both seals were detected within days of their return to land after a lengthy foraging swim so the report concluded that exposure likely occurred in the seals before they reached land, either while at sea or upon entering the near-shore environment.

Find out more at: http://news.ucdavis.edu/search/news_detail.lasso?id=10572

Heidi is a Marine Biologist who started in the public aquarium industry as an aquarist and now consults to the zoo and aquarium community, creating immersive experiences through interpretation. She has also written a series of children's books about the aquarium and fish world called "Abby's Aquarium Adventures".