Kingman Reef: What a Reef without Humans Looks Like

By Kenneth Wingerter 8 years ago2 Comments 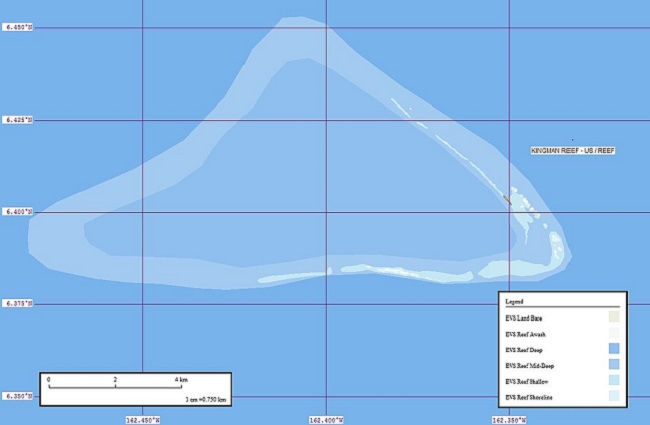 Kingman Reef is a 30-mile triangle of coral reefs that is a part of Line Island group. A lagoon formed by the reefs covers an area that is roughly the size of Manhattan Island. Lying near the Equator, about 1,000 miles south of the Hawaiian Islands, Kingman Reef is situated far from any heavy human activity. And, it is virtually pristine.

Researchers for the National Geographic were quick to make a connection between the reef’s remoteness and its extraordinarily healthy condition. Marine ecologist Enric Sala, a National Geographic Fellow, explains that there are probably as few as 50 reefs in the world that are this unspoiled. For comparison, the relatively developed Christmas Island (population 5,000) is biogeographically similar but is far less intact.

According to research team microbiologist Elizabeth Dinsdale, due to the indirect effects of overfishing, corals near Christmas Island are surrounded by about ten times as many harmful bacteria as are those near Kingman Reef. Australian reef expert Sean Connolly adds “Protecting reefs from overfishing is within our power and might help mitigate adverse effects of other changes, such as global warming.”

One very noticeable difference between Kingman Reef and most other (i.e., overfished) coral reefs is its abundance of large predatory fishes. In fact, this group comprises 85% of the reef’s fish biomass, completely inverting the typical biomass pyramid. At Kingman Reef, an ecological balance is struck only because fish at the bottom of the food chain are highly productive.

Highlighting the stability and vigor of Kingman Reef was the research team’s discovery of a gigantic colony of lobe coral. This impressive colony, which is thought to be newly discovered species, was estimated to be approximately 500 years old.

To view a photo of the giant lobe coral and learn more about these National Geographic expeditions, please visit: