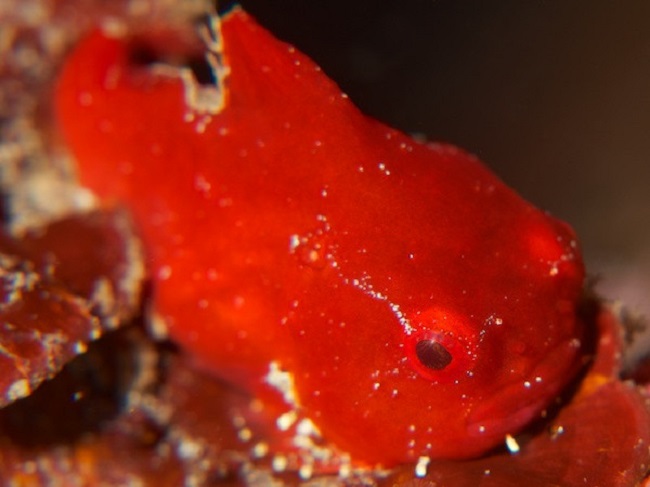 Just one month ago, we reported on the availability of some unusual species offered by temperate marine aquarium livestock specialists Coldwater Marine Aquatics. Apparently quite intent on making inroads into the aquarium hobbyist market, the Oregon-based retailers have been steadily increasing the selection of quality temperate marine fish and invertebrates that can be had at a reasonable price. Their own availability list has undoubtedly been greatly enhanced by last week’s acquisition of the much sought-after Lethotremus awae, the Dango-uo lumpfish.

The species has a rather small Northwest Pacific distribution, occurring exclusively in the east coast of central Japan and the Yellow Sea near Chefoo, China. Cold Water Marine Aquatics tells us that they have obtained these specimens from a Japanese collector. The same source has provided them with Dango-uo in other recent shipments, which also included pygmy filefish, rooster waspfish and some impressive bat stars. Future shipments will likely include Eumicrotremus taranetzi, the Name-dango (the very ones that have been seen stuck to balloons in displays in Japan). Public aquariums snatched up the latest batch of Dango-uo before many hobbyists were even aware that they were available. So, with private demand still reasonably high, plans for forthcoming shipments are already in the making.

But, improvements in logistics will be made prior to the next consignment. According to co-owner Stu Wobbe, the latest shipment “went from transit in Japan to sitting in customs in California for two days, and then the Port of Portland wouldn’t release them to us. Total transit was close to four days, it was a heck of an ordeal.” He further explains that in the past they have piggybacked items like the filefish on orders with other dealers, albeit with poor survival rates “since they immediately assume all animals are tropical and begin acclimating them to 78+ degree water, then re-bag them and ship them to us with heat packs. Hence, why we went ahead and got our import/export license to do it ourselves.”

As did the recent imports from Europe, these new arrivals sold out before any specimens could be paired and set aside for breeding projects. However, Wobbe is determined to retain individuals from upcoming shipments for broodstock. Culture techniques for Dango-uo and Name-dango are probably similar to that of the undeniably loveable Pacific spiny lumpsucker, which has already been reared through the Vancouver Aquarium Fish Research Propagation Project.

To keep up with new offerings at Coldwater Marine Aquatics, visit them on Facebook at:
https://www.facebook.com/ColdwaterMarineAquatics?fref=ts.