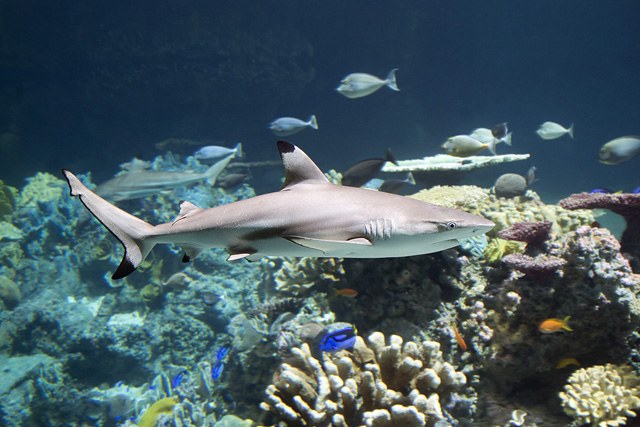 The new Blacktip Reef exhibit at the National Aquarium in Baltimore, MD (USA)


The new Blacktip Reef exhibit will give aquarium-goers views of reef life from both above and below the water’s surface.  The aquarium currently houses over 700 animals spanning 65 species, including 20 blacktip reef sharks and National Aquarium’s famous 555-pound, three-legged green sea turtle, Calypso.  The exhibit will also soon receive livestock from DC’s National Aquarium, which is set to close by September 30, 2013.

As for the corals you see in the photos … they’re replicas.  Sorry, reefkeepers.  But we have to say (from what we see in the photos) they are some of the most realistic replicas we’ve seen and are arranged in a very natural aquascape.  Besides, it’s probably not the best idea to use live corals in a tank primarily designed to house 20 reef sharks.

In partnership with Discovery Channel (who, surprise surprise, is set to premiere Shark Week this Sunday), the National Aquarium has also set up a live 24 hour camera feed of the Blacktip Reef.  Follow National Aquarium’s blog for more information about their new exhibit.