A fish with clear blood 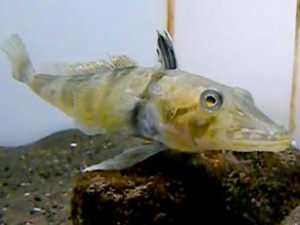 Every vertebrate has hemoglobin that makes the blood red…not true.  A harmless, odd-looking fish that is found most commonly at depths of 200 – 400 m is an anomaly! The Ocellated Icefish (Chionodraco rastrospinosus) lives in the icy waters from the South Orkney Islands, South Shetland Islands to the Antarctic Peninsula, where it manages to stay alive with completely transparent blood.

Researchers believe that the fish can live without hemoglobin because it has a large heart and uses blood plasma to circulate oxygen throughout its body.  Lacking in scales, its skin is also thought to be able to absorb oxygen from the rich Antarctic waters.

A pair of these fish spawned earlier this year in an exhibit at Tokyo Sealife Park…scientists hope the mated pair of icefish and their offspring will help researchers unlock this fish’s secrets.

The Coral Reef Aquarium by Tony Vargas is sold out