A Match Made at MACNA. 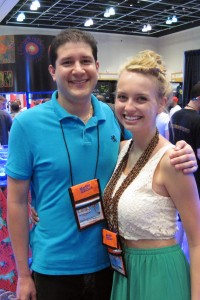 If you were lucky enough to attend MACNA 2013, I am sure you noticed the fabulous weather and possibly the breathtaking sunrises.  Such was the background for the wedding proposal of Jared Singh to his new fiancé Nadia Morrow.  The happy couple met several years ago and live in Las Cruces, New Mexico.  For a valentines gift for Jared, Nadia bought two full passes to MACNA 2013.  Prior to flying into Ft Lauderdale, Nadia had seen the photos of the sunrise posted on the MACNA website and had stated she wished to see it in person.  So on their first morning in florida, down to the beach they went to watch their first sunrise over their first ocean.  As the sun rose, and under the pretext of finding seashells, Jared dropped to one knee and proposed.  And as they say…. the rest is history.   However, the story doesnt end there.  After 3 days of fun at MACNA our happy couple made their way to the airport to return home, only to find that they couldnt fly with their coral purchases.  Since it was Labor Day, no Fedex offices were open to ship their corals and so they did what all respectable reefers would do… Hired a car and drove 2000 miles home to New Mexico.  Now that is what I call a memorable trip!

All of the staff at Reefs.com wish you both the very best wishes in your life and reefkeeping together!

Fluval to premiere new website and aquatic films. Oh yeah, they also discovered a fish species along the way