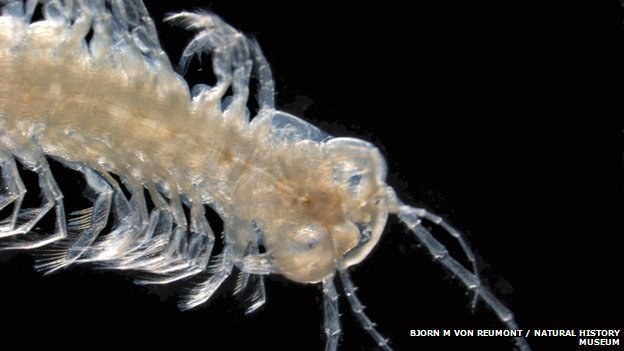 The “remipede” (Speleonectes tulumensis) as it is called, was recently discovered in underwater caves located in the Caribbean, Canary Islands, and Western Australia and its primary meal is that of other crustaceans.  As mentioned above, S. tulumensis injects its prey with venom similar to that of a rattlesnake and this deadly concoction subsequently liquefies the targets soft tissue. The remipede then simply sucks the liquefied tissue from the exoskeleton, similar to someone sucking the jelly out of a jelly-filled doughnut.

The new discovery is documented in the journal Molecular Biology and Evolution.

According to the BBC story:

Co-author Dr Ronald Jenner, a zoologist at London’s Natural History Museum said: “The unique insights from this study really help improve our understanding of the evolution of animal venoms.

“The spider-like feeding technique of the remipede is unique among crustaceans. This venom is clearly a great adaptation for these blind cave-dwellers that live in nutrient-poor underwater caves.” ….

Dr Bjoern von Reumont, also from the Natural History Museum stated that “This is the first time we have seen venom being used in crustaceans and the study adds a new major animal group to the roster of known venomous animals.