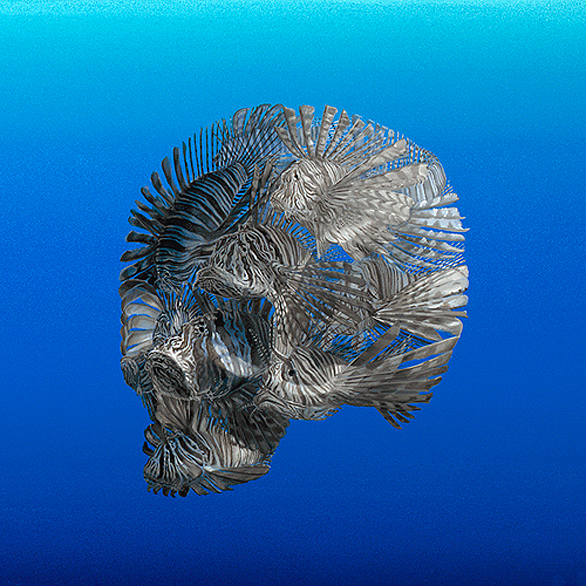 “Curse of the Caribbean”: from an oil painting by Pascal Lecocq. A frequent presence at marine aquarium and dive industry events, French artist Pascal Lecocq has departed from his usual whimsical compositions and offered his statement on the tragedy of Pterois spp. lionfishes spreading throughout the Caribbean and tropical Western Atlantic. CALLIGRAMME DE GRENOUILLE 30/ Calligram of Frog #30 by Pascal Lecocq. Click to enlarge. Known as “The Painter of Blue,” Pascal is best known for a painting called Corrida III depicting a scuba diver playing matador with Great White Shark. Here’s how the artist describes his approach to painting: Having always my head in the clouds, I’m painting an imaginary universe between outer space and the depth of the oceans, a refuge to escape the contemporary reality, I offer too to my viewers. As it happens, the traditional oil painting is my best way to share my thoughts and I try to bring it to perfection since 35 years, just to be sure the viewer will focus on the subject, not the medium. I’m increasing the layers of meaning (aesthetic, political, ecological, symbolic and allegorical), in an endless play MORE: Ocean Blues: The Curse of the Caribbean

Paul Walker, a Friend of the Ocean