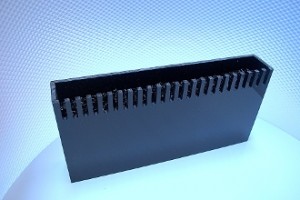 For years, mainstream aquarium manufacturers have been using the same large obnoxious overflow boxes that detract from the look of our aquariums. Many times these overflow boxes are made of a textured ABS plastic, and if you have ever had one, you know they can be quite a pain to keep clear of algae. If you’re like me, and prefer the background of your aquarium sparkling clean, then this is just not a viable option. When left alone for long enough, coralline algae will take foot which is even more difficult to remove from the textured ABS. We are finally seeing some more great options compared to the big ugly box.

I’m a big fan of bulkheads going through the back of the aquarium as opposed to through the bottom. This gives us a few options that take up considerably less room and look much cleaner, overall. Also, in the off chance that a bulkhead does actually fail, we can easily replace gaskets by just draining a couple inches of water out of the aquarium. One argument I have heard against bulkheads through the back of the tank is that you cannot place the aquarium directly up against a wall; I call shenanigans as you don’t want to ruin your wall with salt creep and overspray anyways. 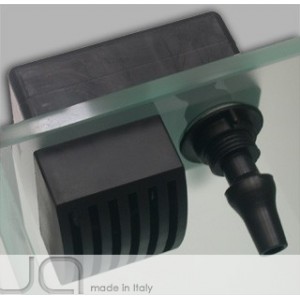 Released a few years ago by the Italian company Xaqua, the X-inout is still a great option for those considering an outside the box approach to getting water down to their sump. Not only does it have an incredibly small footprint, the X-inout features an inlet that creates a pulsing movement with no moving parts whatsoever. The pulsing won’t be replacing any wave makers or powerheads in most aquariums, but it does add some additional appeal to the unit. The X-inout can handle roughly 660 GPH and can be purchased direct from the manufacturer. 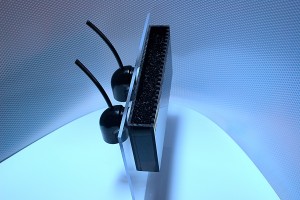 Glass-Holes offers some great, sleek options. These kits are relatively affordable, and extremely easy to install. They offer five size options from 200 GPH up to 3,000 GPH with various additional choices. These boxes are some of the most streamlined overflows I have seen, with most less than 2” deep, and the 3,000 GPH unit coming in only a tad deeper at 3.75”. 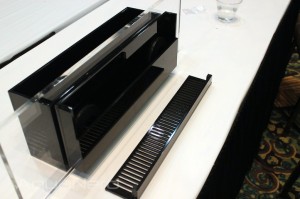 Want to take it up a notch? Reef Savvy has recently released their new Ghost Overflow that catches the eye of any reefer (or does it?), while being dead silent. The Ghost can be ran with either full siphon (think BeAnAnimal) or vented stand pipes. Two sizes are available, a monster 24” (3,500 GPH)  and more modest 16” model (1,800 GPH). Both utilize a total of five bulkheads; two penetrate the back side of the aquarium, while the other three are drains through the bottom of the overflow itself. One of my favorite features is the removable magnetic weir, which allows for easy cleaning. Savvy even offers this as a separate component so you can keep a clean one ready to go.

Finally let’s not forget about the plain good ‘ole bulkhead strainer. Sure you’re not going to get the same kind of surface skimming ability as an overflow box due to pure lack of surface area, although with enough [return] flow or by employing multiple bulkheads coupled with strainers you can achieve the same effect for a fraction of the cost. Lifegard Aquatics has recently released larger versions of their low profile bulkhead strainers that I have put to use in multiple installations.

These various overflow options leave ample space below them to keep our beloved corals, allow more territory for fish , are generally more affordable to purchase, and best of all, are easy as heck to keep clean. For your next aquarium, think outside the big ugly box.

The Resurrection Coral, AKA Zombie Coral