Shark moms go home  to the place where they were born to give birth to their own young, states a lengthy study published in the Molecular Ecology Journal.  The detailed study took nearly two decades to complete. 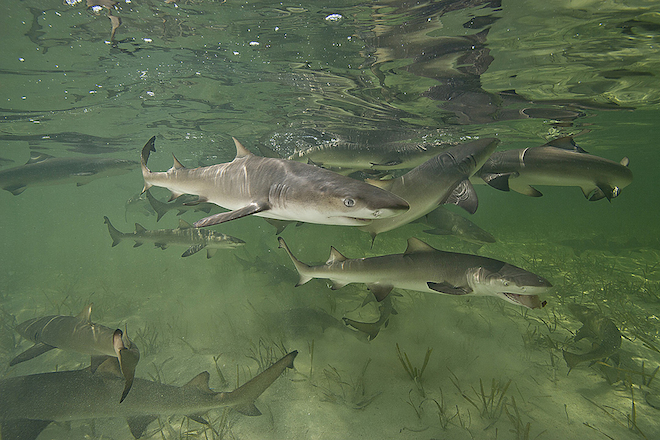 The study focused on lemon sharks which leave off  the island Bimini in The Bahamas, but the researchers say the study is applicable to many other species of sharks.Kevin Feldheim, manager of the Pritzker Laboratory for Molecular Systematics and Evolution at The Field Museum, led the study. In 1995, he and his colleagues captured, tagged and released more than 2,000 baby lemon sharks.

The researchers used the individual sharks DNA to create a family tree which they used to trace the sharks migration patterns, “We found that newborn sharks captured in the mid-1990s left the safety of the islands when they were between five and eight years old.
Yet, despite leaving and visiting many other islands in their travels, these sharks ‘remember’ where they were born after a decade of roving, and are able to find the island again when they are pregnant and ready to give birth.”

Scientists had been previously unable to track sharks so closely, but the unique location of Bimini lagoon proved the perfect set up where nearly every shark that was born was able to be tagged. Through their hard work, scientists were able to determine that female
sharks have a strong sense of home, and return to their homes to give birth.