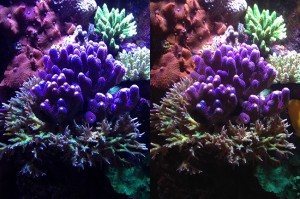 By now it is abundantly clear that LED lighting is the charmed prince and future king of reef lighting. It is also clear that even in the best of circumstances LED lit tanks produce a light that is very skewed to the blue. Even if they don’t read that way to the naked eye, the moment you try to take a photograph the truth becomes apparent. Husbandry debates aside, I think it is fair to say that all reef keepers loathe the preponderance of barely perceptible, unrealistically colored, intolerably bad photographs that litter reef boards and vendor forums. It really makes on-line reefing a greatly diminished experience.

Well I am here to put the smurfs on alert. NY hobbyist and professional photographer Mike Cuttone has stumbled upon a remarkably easy and cheap solution that really could make the reefing world a better place for you and me.

In Mike’s own words:
There has long been a problem getting “true color” photos of our tanks and corals with a cell phone. Even a good DSLR camera, if you are unaware of how to set up a custom white balance (which can be a daunting task in itself) the photos will not come out with an accurate color representation.There is nothing worse than trying to show someone your beautiful tank and the photos just keep coming out BLUE! BLUE! BLUE!

We have all experienced someone trying to sell you a frag on a forum and you doing your best to imagine its true color only to find out when you go to pick it up it is not at all what you expected. It is time to say goodbye to the line “Sorry for the crappy cell phone pics”  There is a simple, inexpensive, easy to use solution. 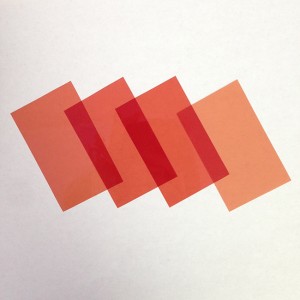 Let me explain–in photography studios they sometimes use colored “Gels” and put them over flashes to change a normal white background to a colored background depending on the color of the gel used. This is a simple trick that saves them from purchasing multiple colored backgrounds.
The other day I stumbled across an old box of these gels and as a blast of blue actinic light from my tank assaulted me, I got an idea. With a bit of trial and error I have discovered that by simply placing a specific shade of red/orange colored gel or over your cell phone lens and taking the photo as you normally would, it removes the BLUE from the photo thus giving a more true to color representation. I have 4 slightly different colored gels and they give slightly different result. Depending on the lighting you are using one might work better for you than the other. It is really that simple.

As you can see from the accompanying sets of photos the results are quite dramatic. 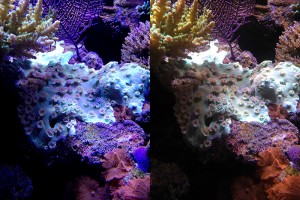 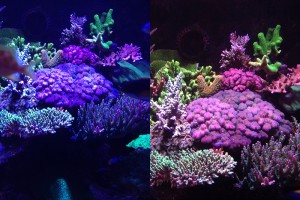 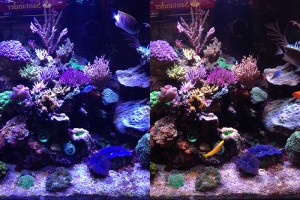 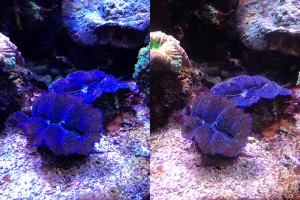 It is hard to believe that given the number of quality photographers that abound in the hobby that no one has thought of this before, but I am unaware of this simple procedure being used with any regularity. The only drawback I can see is that the gel sets come in boxes in large sizes and quantities that far exceed individual needs. Right here and now I am starting my personal appeal to all clubs and hobbyist communities to invest in a box of these gels and distribute them widely throughout your community. Imagine a reefing world where all those horrible on-line photos were at least close to color correct if not in focus! I’m being serious here. We can do this! Just follow this thread on Manhattan Reefs to see the amazing results folks are already having: click here

If you just want to try this out before joining my call to arms, Mike is making small sets of these available for a nominal $2-5 fee depending on size. The word is that the larger sizes work great on DSLR cameras too! If interested,  Contact MikeC at Capturedintime@optonline.net