Sushi restaurateur Kiyoshi Kimura paid 7.36 million yen (about $70,000) for a 507-pound bluefin tuna in the year’s celebratory first auction at Tokyo’s Tsukiji market on Sunday, just 5 percent of what he paid a year earlier despite signs that the species is in serious decline. Kimura’s bid last year,for a bluefin of roughly the same size, at 489 pounds, was 154.4 million yen. 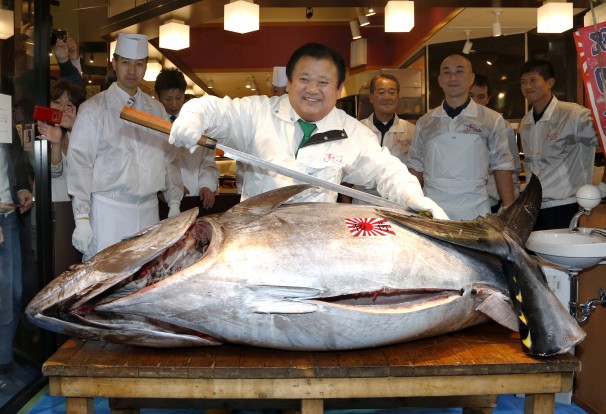 Stocks of all three bluefin species — the Pacific, Southern and Atlantic — have fallen over the past 15 years amid overfishing. Environmentalists say growing worldwide consumption of bluefin tuna is leading to its depletion, and that those in charge of managing fisheries for the species are failing to take responsible action to protect it.

According to a stock assessment released last year by the International Scientific Committee for Tuna and Tuna-like Species in the North Pacific Ocean, the bluefin tuna population is at less than 4 percent of its unfished size.

“The population has effectively been decimated,” said Amanda Nickson, director for global tuna conservation for The Pew Environment Group. “Over 90 percent of bluefin tuna are caught before they reach reproductive age. You have to wonder if this remotely sustainable.” MORE