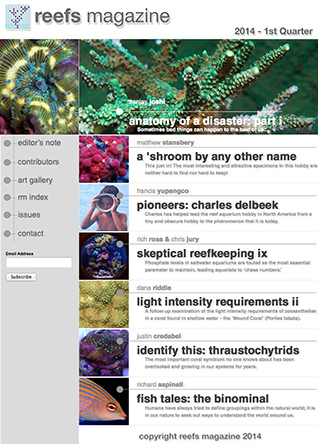 In the Fall 2009 issue of Reefs Magazine we introduced a number of articles that revolved one way or another around difficulties that serious aquarists encountered with their systems. We facetiously refer to this issue as our “Disaster issue”, but looking back at it, I feel it is one of the most important issues we have released. It is easy and fun for people to write about their successes and triumphs, but it takes the truly dedicated among us to detail their tribulations and failures. These are the kinds of contributions that really help us all learn and grow.

While we are not dedicating this entire issue to disasters, our feature is part 1 of a thought- provoking examination of the anatomy of the disaster that beset Sanjay Joshi and his legendary 500g. reef. We can all learn from the clear- headed and analytical approach he took to figuring out how to deal with his heartbreaking and confounding situation. We thank him for his honesty and willingness to share.

In Skeptical Reefkeeping IX, Rich Ross is joined by our old friend Chris Jury as they try to come to terms with the “impossible” yet confirmed PO4 readings in Rich’s gorgeous reef. The analysis is thorough, thought- provoking, grounded in science and suggestive of a far more complex picture regarding PO4 and its role in our aquariums. We are also joined for the first time by the “Fish Geek” himself, Francis Yupangco who presents a Pioneer Profile of hobby mainstay Charles Delbeek. Dana Riddle returns with part 2 of his examination of the illumination requirements of a shallow tide pool coral Porites lobata and the implications the real world data has for lighting our captive reefs. Justin Credable introduces us to the Thraustochytrids- the most important coral symbionts no one knows, while Matt Stansbery re-introduces us to the Corallimorphs that we all thought we knew. Finally, in Fish Tales, Richard Aspinall explains in lucid detail the history, logic and utility of binomial nomenclature. If you have ever wondered about those strange Latin names you see bandied about, this is the article for you. Richard also contributes an art gallery worth of his beautiful underwater photographs.

Important contributions all. We hope you enjoy.