By Austin Lefevre 6 years ago2 Comments 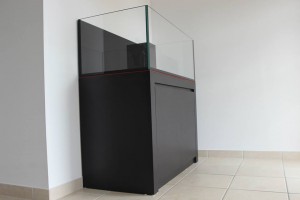 Reef Savvy is at it again, blowing the doors (panes?) off the competition with little touches that exemplify perfection in each and every one of their builds. These new pictures recently shared by Reef Savvy on Facebook show an aquarium featuring a red pinstripe that intrigues one’s attention, yet is subtle enough to not draw focus away from the aquarium inhabitants. This aquarium is the first thing you see when walking into the offices of Reef Savvy… talk about making a first impression! 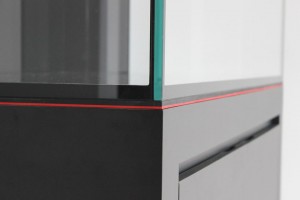 To me it’s the little things that count; perfect silicone lines, beveled glass edges coercing your fingers to be run over them, low-profile overflows hiding in plain sight, all complimenting each other producing a clean finish that’s so enticing it’s almost a shame to put anything in them… almost. Reef Savvy brings each and every one of these ‘little things’ to the table in their aquariums, and seem to raise the bar every time I turn around. This time the red pinstripe really stood out to me, so I reached out to Felix Bordon, President and Senior Designer of Reef Savvy, to get the inside scoop. “Something about red…It really conveys passion. The entire bottom is red, but when you view it on the stand, you just get a glimpse of it, a pinstripe of what lies underneath. The bottom of that aquarium has 4 layers and 3 different adhesives which were all hand laminated in-house.” Now if that doesn’t define my love affair with the ‘little things’, I just don’t know what would. 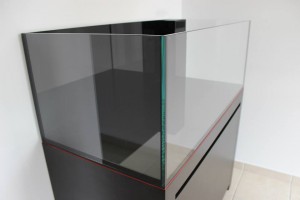 Between their release of the Ghost Overflow, building massive aquariums on-site and continuously pushing the limits of the rather drab world of mass produced glass boxes, you cannot go wrong with an aquarium from Reef Savvy. Our hats are off to Felix and crew, and we cannot wait to see what else you have in store.