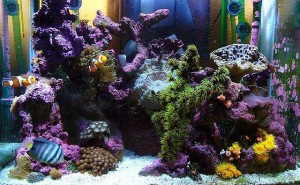 Eurogroup for Animals (based in Brussels) is asking MEPs, ahead of the May elections, to sign a pledge to work towards banning the import of wild caught animals

OATA (The Ornamental Aquatic Trade Association) Chief Executive Keith Davenport sees it as the hobby being under threat: “Taken to its logical conclusion this would mean if you want to keep tropical marine or freshwater fish, corals, soft corals or other invertebrates you might as well forget it. All of these are either wild-caught and/or exotic, which means they’re not native to the UK, so they would no longer be available to buy.”

OATA is urging keen fish keepers to contact MEPs to urge them not to sign the Eurogroup for Animals pledge.  A special #handsoffmyhobby campaign has been launched to get passionate aquarium hobbyists to shout about what they love about keeping fish.

We’re all for keeping the hobby going, but at what cost? Is this pledge not a step in the right direction?  Should exotics be included in the pledge?  Should they not rather say that all exotics should be captive bred?  Why not tell them what you think.  Have a look at: http://www.ornamentalfish.org for more.

Is Dominica home to the world’s cutest fishes? Quite possibly