By AquaNerd 7 years ago4 Comments 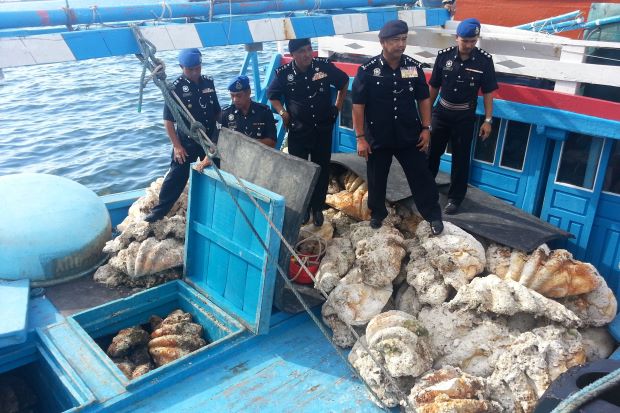 Here is a very troubling story out of Malaysia. According to The Star Online, a group of nine Vietnamese fishermen were arrested for illegally harvesting dozens of giant clams whose combined weight totalled nearly 20 metric tons (almost 44,000 pounds). The arrest is reportedly the first of its kind, but officials strongly believe that this isn’t the first incident for these fisherman, who were arrsted on Monday. The clams have a value of RM500,000, which roughly translates to somethine like $150,000 US, as their shells are valuable in the curio trade as well as in the cosmetics industry. The giant clams, which are probably of the species but could include several others, are obviously endangered and protected marine species that require specialized permitting to collect. It is even illegal to sell the clam shells without special permits. In addition to the fishermen, the boat company is also under investigation, as it is believed that they entered into a joint venture with the fishermen to harvest the clams MORE: Dozens of Huge Tridacnid Clams Seized from Vietnamese Fishermen