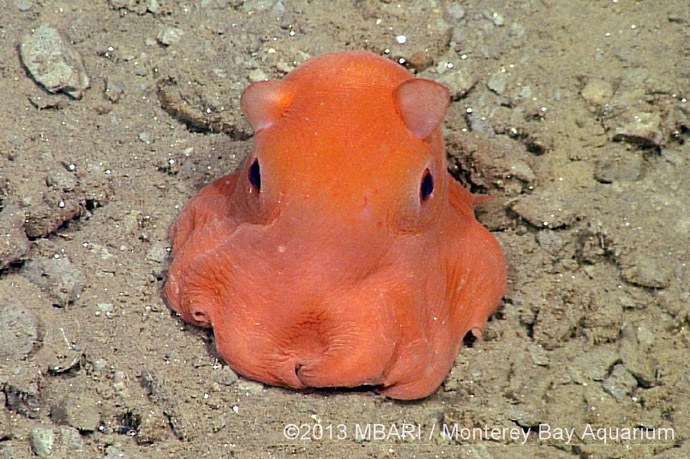 
In an exhibit dedicated to some of the world’s coolest animals including prehistoric chambered nautilus, flamboyant cuttlefish, giant octopus, the master-of-disguise wunderpus, and pigment-shifting squids, you have to be quite special to stand out in this crowd. But one eight-legged citizen has done just that.

The ultra-deepwater and ultra-bizarre (if not ultra-cute) flapjack octopus has stolen the spotlight at Monterey Bay Aquarium’s newest exhibit, Tentacles.  Why?  The video below speaks for itself.  Crowds flock to the special tall, columnar tank located in the dark corner of the exhibit (lit only by red lights) to oooooh and awwww at this pint-sized natural wonder with webbed tentacles, dumbo-like “ears” (actually fins), and big piercing red eyes.

There are currently fourteen known species of flapjack octopus (genus Opisthoteuthis, suborder Cirrina) that inhabit the Pacific deep seafloor from California to Japan.  We’re talking pitch-black depths in excess of 350 meters to nearly 600 meters.  Monterey Bay Aquarium Research Institute believes the flapjack octopus they have on exhibit is a new, undescribed species.  Taxonomic work is currently underway to give this little fella an official scientific name (if it is indeed determined a new species).

If you’re considering a family vacation this Spring, the flapjack octopus at Monterey Bay Aquarium welcomes you with all eight of his adorable webbed arms.

Reefs in Art: Our Changing Seas