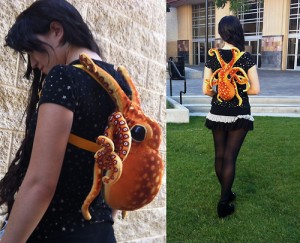 Mainly, Cephalopods in Fashion. I love to think I’m extremely chic and avant-garde when it comes to my fashion sense, but if I’m being completely honest – I’m a basic black, white and grey kinda gal.  Every once in a while I’ll experiment with something I think is “really cool”, which is basically everyone else’s “really lame and dorky”. With that being said, I present you with this “really cool” OCTOPUS BACKPACK! I love a good backpack since I bike to work the majority of the time, and I lurve me some cephalopods. They’re beautiful, intelligent, cunning and deadly – all traits I aspire to. If you crave having an octopus hang off your back and (unlike me) don’t wish to have one permanently inked to oneself – I would suggest you pick up one of these – except you can’t. It’s a one-of-a-kind piece brought to you by Jen via her tumblr page which you can check out here: Hi Guys I Made Myself An Octopus Backpack

I feel strongly that these should be mass-produced as there’s no way I’m the only one who finds this fantastic! I reached out to Jen and offered her a fancy sum for my very own, but have yet to hear back.

Side note: Given my Octopus Back Tattoo, this would feel like an octopus giving an octopus a piggy-back ride. ‘Nough said.